SINGAPORE - A day after saying that the MRT will be the primary mode of transport during the Dec 3-9 Asean Para Games (APG), organisers have clarified that public trains are just one option for athletes to take at the event.

At a hastily-arranged press briefing on Thursday (Oct 8), Singapore Asean Para Games Organising Committee (Sapgoc) chairman Lim Teck Yin said shuttle buses will be provided for athletes, while there will also be shuttle services for movement within the Kallang cluster.

"I won't be disappointed if the athletes don't take the train in the end," he said. "It's their choice and we must respect it."

He also said that Team Singapore athletes had not been briefed on the transport plan, as an announcement was planned at a joint training camp next month.

The Straits Times broke the news on Thursday that athletes and officials will use the MRT to shuttle between the Games Village at Marina Bay Sands and the Singapore Sports Hub in Kallang, where eight of the 15 sports on offer will be played. Mr Lim had told ST on Wednesday that the trains will be the "primary mode of transport for athletes and officials".

ST digital news editor Ernest Luis spoke with sports correspondent Sanjay Nair - who has covered the stories thus far - in an episode of a new series called Why It Matters.

All 3,000 athletes and officials from 11 countries will be housed at MBS. The hotel is linked to the Circle Line's Bayfront station, three stops away from the Stadium station.

Mr Lim, who is also chief executive officer of Sport Singapore, sought to dispel any notion that para athletes are treated unfairly vis-a-vis the able-bodied athletes who featured at the SEA Games in June. 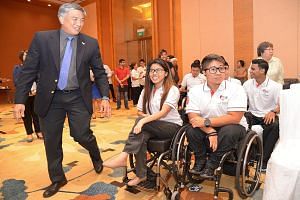 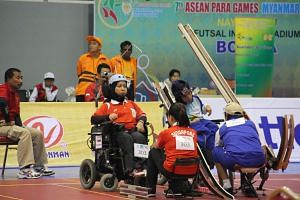 He said: "I hope the public understands that we are not treating para athletes as second-class citizens.

"If anything, you will see from the facts that we are actually doing more as far as transport operations are concerned," he added.

In a meeting with Singapore Disability Sports Council (SDSC) officials last week, team managers were told that public trains would be the primary mode of transport for the biennial meet, which Singapore is hosting for the first time.

Mr Lim said the SDSC did not inform him about the briefing, which he added was "their own prerogative".

The unconventional transport arrangement sparked criticism online, with many worried that athletes with disabilities will be jostling for spots on the train with other commuters, especially during rush hour.

Speaking during a visit to the Singapore Land Authority earlier on Thursday, Culture, Community and Youth Minister Grace Fu said that the welfare of athletes and officials is the "top concern", while noting that the important message of the APG is "inclusiveness, how do we bring the Games, and how do we bring the athletes to the bigger community".

Ms Fu added: "I think having the athletes incorporated in our public transport system, having our volunteers help them in getting to the venues, actually would show the spirit of the Games to its fullest.

"I'd like to work with the associations better and also have a discussion with the athletes."

Jalan Besar GRC MP and president of the Autism Resource Centre Denise Phua said: "We should be proud of our athletes with special needs and they should be seen and heard in public. Hence, the idea to have them travel in public where appropriate.

"However, we need to be athlete-centred as well and if they choose or need specially arranged transport, they can exercise the choice to do so.

"After putting in so much investments in the Asean Para Games, and led by a minister (no less), it is unlikely that the organisers would make decisions that are not inclusive or inconsiderate of the needs of the special athletes."