For the first time since Independence, Singapore qualifies on merit for seven sports with possible chance of triumph

When the Singapore contingent steps out at the Maracana Stadium come Aug 5 for the Olympic opening ceremony, 25 athletes will join an exclusive club who have gone the fastest, leapt the highest and become the strongest in the nation's sporting history.

This group will also distinguish itself in that in all seven sports the Republic is contesting at the Games, athletes have qualified on merit, surpassing the previous high of six sports (2008) since Independence.

Besides being the joint largest squad - on a par with the Beijing Games - it is also arguably the nation's best chance of returning in triumph like never before.

For a third straight edition, Feng Tianwei and Co will spearhead the charge for a place - or two - on the podium, while swimmer Joseph Schooling is also tipped for glory. 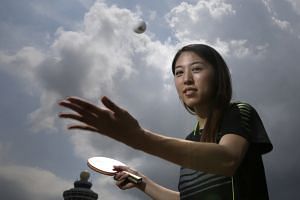 Olympics: The world is now Yu Mengyu's stage when it comes to table tennis

These heightened hopes are the result of continued investment through funds and facilities pumped in through Sport Singapore and the Singapore Sports Institute, said veteran sports officials.

They lead to Singapore's sustained progress and growing commitment on the part of athletes.

Said chef de mission Low Teo Ping: "It's a reflection of the fact that we've progressed in high-performance sports. I'm sure this is only the start of us seeing more quality and high-level athletes qualifying on merit.

"We could not do it before," added Low, who is Singapore Rugby Union president and previously helmed Singapore Sailing.

"I still remember 20 years ago when we relied on wild cards. There was nothing wrong with that - they were opportunities for us to know what needs to be done and today we're seeing the fruit."

Even within individual sports, there are breakthroughs in Singapore's 17th appearance at the Olympics. Sailing, in particular, is sending a bumper crop, with nine out of the 10 competitors earning their berths on merit.

Others, training in disciplines not known to be Singapore's forte, also qualified. Saiyidah Aisyah will become Singapore's first Olympic rower, while Neo Jie Shi is the first marathoner in two decades.

For Chris Chan, the change in athletes over the 15 years he has been secretary-general of the Singapore National Olympic Council (SNOC) has been obvious. The SNOC is the governing authority for Singapore's participation at major Games.

"Athletes nowadays seem to want more ownership of their own programmes (and) also seem to be very knowledgeable about what works for them and what doesn't," he said.

"Top athletes are also doing very well being public ambassadors of their sports... they have cultivated their own following and are being seen as role models in our society."

Badminton player Derek Wong, who is flag bearer and competing in his second straight Games, is hopeful the upward trend will continue. The Olympics, for him, is where athletes can dare to dream the impossible.

Said the 27-year-old: "More athletes now are challenged to train at the Olympic level, instead of just for regional events.

"Anything can happen. With a bit of luck and hard work put in before, you never know." A version of this article appeared in the print edition of The Sunday Times on July 24, 2016, with the headline 'A step forward for Rio'. Subscribe
Topics:
More
Whatsapp Linkedin FB Messenger Telegram Reddit WeChat Pinterest Print Purchase Article Copy permalink