Jason Chee has no legs, no left arm, is missing one finger and parts of two other fingers on his right hand and has only one eye. Yet a man who has lost so much still finds a way to win.

Yesterday, the courageous 34-year-old finally won the medal he had been longing for when he clinched his first individual gold in the men's singles Class 2 event at the Kuala Lumpur Asean Para Games. One might say he has an unbeatable spirit.

"Winning this gold was the most important moment for me. I have waited so long to win the gold," said Chee, who competes in a wheelchair, as do all paddlers in classes 1-5. The higher the number, the greater the level of mobility.

Despite the loss of his eye, he was still in the same classification - which only takes into account the player's range of movement - as he was at the 2015 APG in Singapore.

But it was almost deja vu for Chee as he was two points away from losing to Thailand's Thinathet Natthawut, who denied him the gold medal when they met two years ago.

I'm a fighter and I never give up - that's my strength and that's what I have within me.

JASON CHEE, after finishing undefeated in the five-player round-robin event. 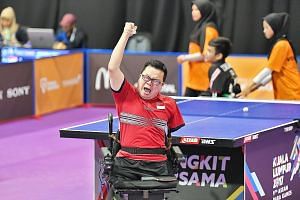 After the final point, he tossed his bat and punched the air as he raised his right arm in triumph.

Talking about the nerve-racking moment against Thinathet, Chee said: "I told myself to stay calm and composed and not to be nervous as the match was not over yet. I had to be steady, take it one point at a time and try to fight back.

"I'm a fighter and I never give up - that's my strength and that's what I have within me."

Indeed, he has. Just four months ago, after all, he was struggling to hit routine shots. He had lost some peripheral vision and depth perception, following surgery to remove his right eye after he was diagnosed with choroidal melanoma, a cancer of the eye.

The navy serviceman had lost his legs, left arm and suffered the injuries to his right hand in an accident aboard a Republic of Singapore Navy warship in 2012.

But he has remained optimistic. As he said: "I've lost a lot of things and been through a lot of pain, but I have to fight on and remain optimistic.

"That was what my mum used to always tell me.

"In this lifetime, you face many difficulties and it is going to be tough, but you have to overcome them and stay positive."

His mother, Chua Ah Lek, died of kidney failure in 2011 at 65, yet Chee said he could sense her presence and support during the competition.

A version of this article appeared in the print edition of The Straits Times on September 23, 2017, with the headline 'A most important moment'. Subscribe
Topics:
More
Whatsapp Linkedin FB Messenger Telegram Reddit WeChat Pinterest Print Purchase Article Copy permalink