Having prayed to Buddha as a child and after spending her early teens worshipping Jesus, copywriter Hannah Jasmine Kok, 23, no longer believes in the divine.

She said she left the Buddhist faith at 13 as she could not relate to rituals she performed with her parents, and dropped out of church after three years because she "didn't think it was going anywhere".

Now an atheist, she said: "I think it is highly improbable that any god exists. There is no evidence for it." 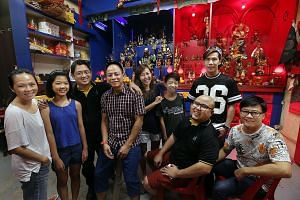 Ms Kok is one of a growing number of young people here with no religious affiliations.

The Department of Statistics' General Household Survey 2015 report released earlier this month found that those who said they had no religious affiliation constituted 18.5 per cent of the resident population last year - up from 17 per cent in 2010. NO NEED FOR DIVINE

I don't think I need divine guidance to make a right or wrong decision. Reason alone can guide such decision- making.

MR BERTRAND SEAH, 21, National University of Singapore political science undergraduate. He grew up Christian in a Methodist school environment, but began doing his own research on religion in junior college.

The religious composition as a whole remained relatively stable - 43.2 per cent of the resident populace identified as Buddhists or Taoists, 18.8 per cent as Christians, 14 per cent as Muslims and 5 per cent as Hindus. The number of Christians increased marginally, while other religions experienced slight declines.

FACTORS BEHIND GROWTH IN THE NON-RELIGIOUS

Academics and religious leaders The Straits Times spoke to said the trend of non-religious affiliation is in tandem with an increasingly educated populace, some of whom might move away from religion if it does not connect with their lives and needs.

The Institute of Policy Studies' senior research fellow Mathew Mathews said this is more common for individuals who grew up in families where religion was already nominally practised.

The Catholic Church said traditional religions have also been slow to engage young people and help them appreciate their faith.

Singapore Buddhist Federation president Seck Kwang Phing believes the youthful face of the non- religious group ties in with a change in attitudes among the young, who have become more independent in their thinking.

He said: "They ask and argue and do not simply allow their parents to select their faiths on their behalf."

Young people today are also exposed to a range of ideologies, which results in a spectrum of views within the non-religious category. The segment therefore includes atheists and agnostics; humanists and secularists; as well as free-thinkers and other individuals who might not necessarily be anti-religion.

National University of Singapore political science undergraduate Bertrand Seah, 21, grew up Christian in a Methodist school environment, but began doing his own research on religion in junior college.

He became influenced by religious critics and scientific scepticism advocates such as American Sam Harris.

Like the other youth The Straits Times spoke to, Mr Seah said he believes in a "rational" approach. "I don't think I need divine guidance to make a right or wrong decision. Reason alone can guide such decision-making," he said.

Experts said the relative stability of a country also means there is less concern about the future because the present is "non-threatening".

When this is the case, there is less incentive to look to religion for divine intervention or for security.

Young people might also be doing their own research before eventually committing to a particular faith, experts said.

Some suggested that the multi- religious make-up of Singapore and the open-door policy of religious institutions here facilitate "shopping" for a religion.

Some young people could also be identifying more with liberal ideologies that clash with religious teachings on topics such as homosexuality.

Youth and religious experts interviewed noted the high-profile failures of institutional religions to uphold their credibility as a moral voice, which may also have turned some people away from religion.

Some cited high-profile incidents such as the City Harvest case, where church leaders were found guilty of misusing around $50 million in church funds.

Several religious leaders said they are concerned about the shift.

Reverend Father Jude David, co-chaplain of the Catholic Church's Office for Young People, believes that without religion "Singapore would certainly lose a part of her soul or spirit".

Reverend Dominic Yeo, the general superintendent of the Assemblies of God of Singapore, agreed. He said religion teaches its followers to be moral, adding: "We need to guard our nation, our children and the next generation against moral decadence."

Others are concerned about solidarity in households where the parents or grandparents are deeply religious. NUS sociologist Paulin Straughan said disparities in religious ideology could result in intergenerational fault lines and a widening gap "because religion, when it is functional, pulls families together".

Ultimately, the consensus among the various groups is for the need for more dialogue to understand "mutual concerns and find ways to negotiate potential tensions", said Dr Mathews. They said this should be backed by more research to understand the specific make-up of Singapore's non-religious segment.

Communication channels already exist. For instance, the Humanist Society - set up to represent Singapore's non-religious population - has been involved in discussions organised by the Inter-Religious Organisation of Singapore and the Inter-Racial and Religious Confidence Circles.

Executive committee member Pearl Lin said the society's role is to provide a voice for the non-religious, whom she said tend to be excluded and forgotten.

But the Buddhist Federation's Venerable Seck is not worried about the growing pool of non-religious Singaporeans. To him, good values and morals are more important.

He said: "As long as there is moral education and the ability to differentiate between what is right and wrong, there will always be common ground among the religious and non-religious."