At school, 16-year-old Joey Heng isn't one of the popular girls.

But the self-professed "low-key" Secondary 4 student has her hands full being popular elsewhere.

With some 20,000 followers on her Instagram, the teen is a "social media influencer" among teens in her age group - showing them the latest fashion trends and new restaurants to visit.

Sometimes, even her mother gets roped in to help her to take "Insta-worthy" photos.

"I just wanted to follow the trend and post photos of myself in the latest fashion," said Joey, who started her account when she was 10 to meet more friends.

"I think people started following me because they thought the clothes I wore were nice."

As her popularity grew, so did the attention she received from blogshops and brands that wanted her to endorse their products, given that each of her posts gets at least 1,000 likes.

As a hobby... I am just showing (my followers) what I want to show them. But as a career, you are going to have to show them everything. I feel I don't want to be that transparent to people I don't even know.

MICHELLE ANNETTE SULLY, a Secondary 4 student who has been using Instagram for the past five years, has about 17,000 followers and has worked with more than 30 sponsors.

Online fame 'may give false sense of self-worth' 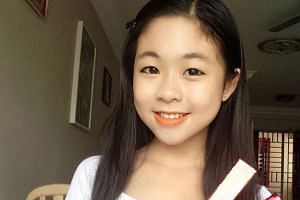 Dip in grades prompts student influencer to call a halt

So far, she has worked with about 100 blogshops and brands, including watch company Daniel Wellington and e-commerce platform ezbuy.

There are a number of other "student influencers" just like her who are followed by tens of thousands on social media. Several study at brand-name schools.

These teens, some as young as 14, take on marketing gigs for sponsors, such as blogshops, cosmetics brands and delivery services, in exchange for freebies, discounts and even advertorial fees. However, there is no estimate of how much they earn as many receive free or discounted items rather than cash for their gigs.

Mostly girls, these "influencers" post photos of themselves in trendy clothes and are often seen at the latest hipster joint. A few are known to show a bit of skin too, presumably to get more followers and better sponsors.

The going is so good for these teens that some of them are considering being a social media celebrity as a profession.

Among them is Catherine Khoo, 16, who has received sponsorships for clothes and accessories.

The Sec 4 student, who has more than 10,000 followers, said her parents were initially against the idea of her being an "influencer" but they have come to accept it after she explained the hard work involved. "I would like to show people how influencers actually work behind the scenes, and how it is a job and not something that you take on just for free things," she said.

Sec 4 student Toh Yi Xuan, who has some 6,000 followers, hopes her popularity will eventually kick-start her modelling career.

Meanwhile, others see being an "influencer" merely as a hobby.

Sec 4 student Michelle Annette Sully, who has been using Instagram for the past five years and has about 17,000 followers, has worked with more than 30 sponsors, including shops selling cosmetics and mobile phone covers.

"As a hobby... I am just showing (my followers) what I want to show them. But as a career, you are going to have to show them everything. I feel I don't want to be that transparent to people I don't even know," said the 16-year-old, who wants to become a doctor.

Teens interviewed said their parents were aware of their social media celebrity status and, for many of them, so are their teachers.

In fact, some teachers told The Sunday Times that they follow their students on Instagram and jokingly address their students by their social media handles.

A teacher at a brand-name school who declined to be named said some of his students aspire to become YouTube personalities and social media stars.

"I advise them not to let these things distract them from their schoolwork for now, but we also have to move with the times. Many influencers make a decent living and earn good money," he said.

"In some ways, if we tread carefully and with guidance, this could be a healthy channel for youth to build confidence and to put their energy to productive use. For instance, to raise awareness and public education on worthy causes," she said.

However, she said parents and teachers should teach their teens to keep themselves safe while using these platforms. Dangers include being duped by older individuals and, in particular, sexual predators.

Like many influencers, Yi Xuan, 16, said she has received at least 50 "creepy" messages of a perverse nature through Instagram.

"Sometimes, it affects me, because I will feel insecure," she said, adding that she ignores these users or even blocks them.

"But it won't stop me. I think I shouldn't give up so easily."