However, there were several concerning trends, such as the large proportion of young drug abusers arrested and the rising number of fires involving power-assisted bicycles and personal mobility devices.

The MHA gave an overview of the findings of the various Home Team agencies as they prepare to release their annual statistics.

The MHA attributed the slight crime rise mainly to an increase in scams, particularly online.

Meanwhile, there was a fall in the number of theft and related crimes, such as theft-in-dwelling and shop theft. The number of motor vehicle and related thefts also dropped.

"Singapore remains relatively drug-free, and this is significant against the backdrop of a more challenging global and regional drug supply situation," the MHA said.

The re-offending rate remained "low and stable", while the number of immigration offenders arrested went down.

There was also a decrease in the number of speeding violations and accidents involving elderly pedestrians.

The Singapore Civil Defence Force's (SCDF) efforts to educate the public about its tiered medical response framework, also brought a drop in the number of non-emergency medical calls.

The tiered response framework ensures that life-threatening emergencies will be prioritised ahead of less serious cases. 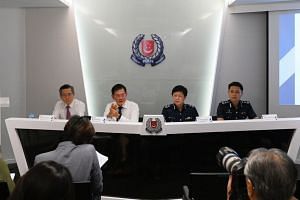 Several concerning trends highlighted include the increase in the number of drug abusers arrested, particularly for abusing new psychoactive substances and methamphetamine.

On the roads, there was an increase in the number of deaths from motorcycle accidents, red-light running violations and accidents caused by drink-driving.

Other areas of concern include incidents of computer misuse, and outrage of modesty especially on public transport and in public entertainment outlets.

The MHA added that the SGSecure movement has gathered "significant momentum" and raised public awareness and preparedness for emergencies.

"Our community is now more aware of the terror threat and the role they play in the SGSecure movement."