The Workers' Party (WP) has moved into its new headquarters in Teambuild Centre in Geylang Road.

WP's media chairman Daniel Goh said the party bought the 110 sq m unit on the fourth floor for about $900,000 earlier this year. It began operating out of its new base, which is located near Paya Lebar MRT station, after renovations were completed late last month.

The WP had moved out of its former headquarters in Syed Alwi Road in December last year after the rental lease expired. The shophouse office was the party's base for the last three general elections and two by-elections in 2012 and 2013, but party leaders said the premises was getting too cramped.

WP's new base has a meeting room and a stage area where the party can introduce candidates to the media or hold events, Dr Goh said. It will be officially opened on Sept 29.

Fund-raising for the new premises began in 2013 during the WP's first variety show called Bricks In Blue. Back then, it had already raised about a third of its $1.5 million target for the down payment on a new place.

The Straits Times reported that WP's elected MPs were each donating $1,000 of their monthly MP salary to a building fund, while the party also received donations from friends and well-wishers. 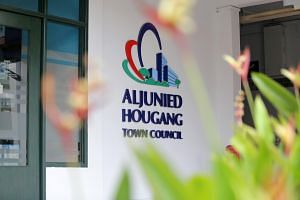 The WP's move to its new home comes ahead of its 60th anniversary in November. It had hoped to find a place in the north-east of Singapore, where the party is most active and the WP-held constituencies of Aljunied and Hougang are located.

The new premises is located in Marine Parade GRC, an area where the party has made its rounds. The WP contested the GRC in the 2015 General Election, where it got 35.9 per cent of votes cast.

Dr Goh said the Teambuild Centre unit was the best option "in terms of location and price".