SINGAPORE - The otter pup that was spotted last month with a wound from a ring around its body was successfully rounded up and treated in a five-hour operation on Thursday (Nov 16).

The young pup was corralled along with six other members of its Pasir Ris family at Pasir Ris beach, otter watcher Jeffery Teo told The Straits Times.

Volunteers and related agencies such as the National Parks Board have been tracking the otter on site from two days ago, Mr Teo said. The pup was caught at the river mouth near Sungei Tampines and darted around 2pm after the operation started in earnest from noon.

"More than 20 people were there, including the Wildlife Reserves Singapore and NParks," he said. "NParks built a special structure to catch the otters."

The operation is the first of its kind in Singapore where a wild otter was successfully isolated, treated and released.

Multiple attempts had been made to capture the single pup, which is believed to be eight to nine months old, but it was too fast and evaded capture. 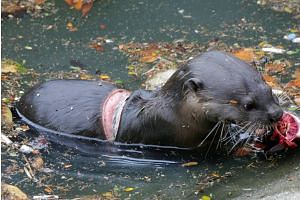 "This was an operation three weeks in the making, starting with detailed observations and evaluation of procedures," he said. "The final procedure involved corralling most but not all of the family that were investigating the operations area. Once the vets succeeded in sedating the otter, the rest were released."

Mr Sivasothi said the otters were not restrained.

"This was important to reduce stress to the family," he said. "A smooth-coated otter family stays together so a single individual can't be easily isolated."

The Pasir Ris family has 11 otters - seven were caught in the enclosure, with two of these eventually escaping. Four others evaded capture.

After the otters were rounded up in the fence-like structure, veterinarians tranquillised the otter pup, which had sustained a deep wound from what looked like a ring of metal wire spotted around its torso last month. It turned out to be made of rubber.

It is unclear how the ring got trapped around the otter. It was removed and the pup was treated on the spot. Multiple veterinarians certified it healthy before it was released back to the wild. The otter was spotted the next morning with its family.

"They all certified that she's good to go," said Mr Teo jubilantly over the phone. 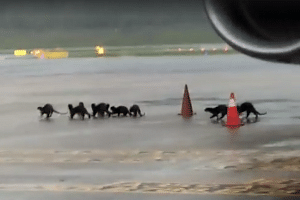 Otters spotted on tarmac at Changi Airport, guided out to beach by airside safety team

The otter watchers have been tracking the pup, which sustained a wound that was visibly worsening, for weeks.

Mr Teo has tracked Singapore's otters for more than five years and is part of the Otter Working Group, a volunteer group set up with several government agencies including NParks, the Agri-Food and Veterinary Authority and PUB last year.

On Tuesday, the same otter family had been spotted on the tarmac at Changi Airport, after heavy rain is believed to have forced them out of their holt.