This scrum of men converged in a swarm, engaged in an epic battle of strength over a ball, has been immortalised in a photograph.

The photograph captures the Royal Shrovetide Football match - an annual rugby-football hybrid game in Ashbourne, England - in which hundreds of players represent rival teams over two days, and try to get the ball to goals that are 5km apart. There are no rules, except to refrain from murder.

This photograph is on display at the World Press Photo Exhibition 2018, which has drawn more than 50,000 people. The exhibition at the National Museum of Singapore ends tomorrow.

Presented by The Straits Times, the exhibition has been lauded as the Oscars of photojournalism. The photographs are poignant and sometimes provocative, and have captured the attention of millions around the world.

"The collection of award-winning photos has the power to move, provoke and inspire. They reflect some of the big issues of our times," said Straits Times (ST) editor Warren Fernandez.

"Among them are also some memorable pictures from our own ST photographers. They are well worth viewing and I hope many more people will get to do so before the exhibition closes," he added.

The pictures, by 42 photographers from 22 countries, were selected from 73,000 submissions from 4,548 photographers across 128 countries. They cover topics from political dissent and culture to environmental issues.

National Museum director Angelita Teo said: "The World Press Photo Exhibition provides a unique opportunity for our visitors to confront and reflect upon contemporary issues facing the world today, as well as think about Singapore's place in our global society."

The exhibition, which started on Oct 6, offers visitors the opportunity to consider the issues on display more deeply. For visitors who wish to find out more about each photograph, guided tours are carried out at the exhibition on weekends. 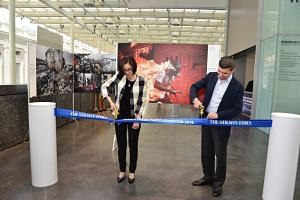 "Most of the people who came for the exhibition tour were interested in the stories behind the photos," said Mrs Olivia Jacob, 63, a retired teacher who facilitated tours at the exhibition on some weekends.

"They were especially moved by the issues highlighting 'breast ironing' in Cameroon and the 'resignation syndrome' in Sweden," she said.

She added: "Breast ironing is literally the use of hot implements to suppress breast development in young girls. Meanwhile, the resignation syndrome features young refugees from Russia who go into a state of coma and do not wake.

"The photos left deep impressions with some, especially those who attended the talk by Patrick Brown on the Rohingya crisis."

Visitors who spoke to The Straits Times said they enjoyed what they had seen.

"I enjoyed, in particular, the message about environmentalism that some photographs held. After all, climate change is affecting everything these days."

Talks were also held at the exhibition, on topics ranging from a photojournalist's coverage of North Korea to the experiences of journalists on the ground covering the plight of the Rohingya in Myanmar's Rakhine State.

The exhibition's final talk, on multimedia storytelling and nature photography, by Mr Mark Cheong and Mr Lim Yaohui of The Straits Times, will be delivered today at 10.30am in the Gallery Theatre.