SINGAPORE - Ms Chiang Su Sia was going up an escalator at Payar Lebar MRT station after work when she saw a man ahead of her standing behind a woman acting suspiciously.

The man, who was just one step behind the woman on the escalator, carried his bag in front of him and placed his mobile phone under her skirt.

Realising something was amiss, Ms Chiang decided to alert the woman about the upskirt photo suspect and helped with his eventual arrest.

For her efforts on Sept 30, the 42-year-old finance manager was given a Public Spiritedness Award by the police on Thursday (Oct 24).

Eleven other people were also given the award at the Public Transport Security Command (TransCom) for helping the police with incidents on board public transport or at public transport nodes.

For Ms Chiang, she did not want the upskirt photo suspect to get away with his crime and commit similar offences.

"I felt that I needed to be responsible for making sure that the guy was caught," she told The Straits Times.

Recounting the incident, Ms Chiang said that after she saw what the upskirt photo suspect did, the man hurried up the escalator.

When Ms Chiang neared the top of the escalator, she alerted his victim that the man had tried to snap an upskirt photo of her.

The two then decided to tail the suspect, with Ms Chiang informing MRT staff at one point about the incident. 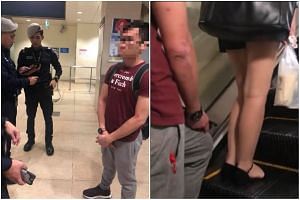 Women who chased down and cornered pervert honoured by police

Station staff managed to stop the man from escaping and the police were eventually called in.

He was later arrested for public nuisance and insulting the modesty of a woman.

Ms Chiang said that the upskirt photo victim was very brave when she decided to tail the suspect.

"I felt that I had to stay around to act as a witness should the man deny his acts," she added. "It is good that victims dare to stand up for themselves. I am glad that I helped to prevent future crimes."

Ms Chiang and the other 11 Public Spiritedness Award recipients were also appointed by the police on Thursday as Riders-On-Watch volunteers.

Under the Riders-On-Watch initiative launched in July, volunteers sign up to help keep a lookout for suspicious items or people, and to alert the police.

The volunteers will also receive the latest crime information for the public transport system.

Since January, 32 members of the public have been commended by TransCom for their public spiritedness.

Assistant Commissioner Evon Ng, Deputy Commander of TransCom, said: "The strong partnership between the public and the police goes a long way to help prevent, deter and detect crimes on the public transport network.

"We encourage commuters to join TransCom's Riders-On-Watch volunteer scheme... Together with the police, commuters can make perpetrators think twice before committing any crimes on the public transport network."