SINGAPORE - A Scoot flight carrying 341 passengers between Singapore and Gold Coast was forced to return to Changi Airport on Wednesday morning (Jan 30).

Flight TR6, which was scheduled to depart at 10.20pm and took off at around 10.35pm on Tuesday, sustained some damage on the exterior of the front windshield during the flight.

A decision was made for the plane to return to Singapore about three hours into the flight as a safety precaution, Scoot said in a statement.

There was no air leak or loss of cabin pressure, the budget airline added.

A replacement plane and a new set of crew was arranged to operate the service upon the plane's return to Singapore.

The original plane returned to Changi Airport at around 4.45am, Scoot said. The replacement plane departed Singapore at 6.56am.

As a result of the delay to TR6, the return flight TR7 from Gold Coast to Singapore was delayed from its scheduled departure at 9.20am to 5.20pm on Wednesday. 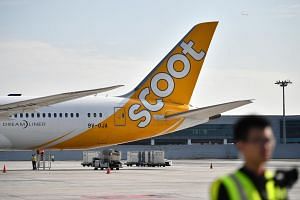 Passengers who might miss their connecting flights in Singapore on Scoot or the airline's partners, including Singapore Airlines, SilkAir and Virgin Australia, will be transferred to the next available flights, Scoot said.

In its statement, Scoot said that it is investigating the cause of the damage to the windshield.

"We regret the disruption caused to our customers' travel plans," the airline said.

"So thankful to the staff and crew who got us back safely," she wrote.

@7NewsBrisbane @GoldCoastBureau @sunriseon7 @TODAYshow Scoot Flight TR 6 from Singapore to Gold Coast turned around mid flight back to Singapore just now after sustaining damage to windscreen. So thankful to the staff & crew who got us back safely pic.twitter.com/zrriH7EbIq