SINGAPORE - Black soldier flies are among nature's "sanitation workers", known for their excellent abilities to convert waste into animal feed and fertilisers.

Now, Wildlife Reserves Singapore (WRS) has plans to outsource the "dirty" job of managing its animal residents' waste to these insect armies.

The 12,000 animal residents of the Singapore Zoo, the Night Safari and the River Safari produce more than 4 tonnes, or 4,000kg, of waste a day.

While the bulk of this is produced by herbivores such as elephants and zebras, about 200kg to 300kg are excreted by meat eaters, the biggest contributors being lions, tigers and bears.

Since March this year, WRS has partnered with researchers from Republic Polytechnic for a one-year study to build a closed-loop waste management system to deal with a portion of waste at Wildlife Reserves Singapore.

The project is supported by the Mandai Research Fund, which was set up by Mandai Park Development to gain a deeper understanding of local biodiversity in the Mandai precinct.

At the moment, global research on the waste-processing abilities of the soldier flies have centred on herbivore waste and food waste, as there are concerns about the potential contamination of carnivore waste, due to the high meat content.

Dr Francis Cabana, assistant director of zoology at WRS, said that because the different parks produce a large amount of carnivore waste every day, the team is studying how to process them despite the concerns.

Insect armies that can manage 4,000kg of animal waste daily

This is the first time that a study is being conducted to look into the viability of rearing black soldier flies on carnivores' dung.

This is followed by carnivore waste, which are excreted by animals such as cheetahs and lions, and herbivore waste, said Dr Lily Ganda, principal investigator of the study.

Black soldier fly larvae reared on carnivore waste are also expected to be larger in size than usual, due to the high crude protein present in carnivore waste, noted Dr Ganda.

Currently, the facility at the Singapore Zoo set up for the study is able to process about 20kg of waste in a week, using a black soldier fly larvae population of 5kg.

The team hopes to be able to convert 100kg per day by January next year.

Each day, raw animal waste is collected from the various enclosures and segregated into carnivore, herbivore and animal food waste. 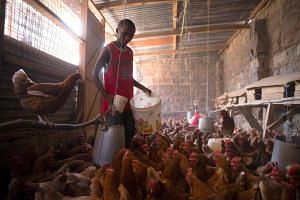 A machine is then used to extract any liquid from the waste to keep it dry.

Dr Cabana explained that the waste is dried to increase the compost rate.

"Since drying the waste, the larvae have been digesting the waste three times faster," he added.

The waste is then placed in compost bins, and the larvae are then loaded onto them to start the compost process.

The resulting frass, or compost, will enter another container via a sieve. The compost is then collected from the container.

The process is repeated when more waste is collected the next day.

Dr Cabana noted that none of the animal feed produced in the study has been given to the animals yet, as the team is still running tests to see if it is safe for animal consumption, and has sufficient nutritional value for the animals.