Civil rights activist Jolovan Wham, 38, was advised by the police to get a permit for an indoor public assembly featuring a foreign speaker, who spoke via video call, three days before the event but did not do so.

These details emerged yesterday, on the first day of Wham's trial, where he is contesting charges of allegedly organising the public assembly on Nov 26, 2016, without a permit, and refusing to sign a statement he made at a police station.

The event was open to the public and saw freelance journalist Kirsten Han and activist Seelan Palay delivering speeches, as did Hong Kong pro-democracy activist Joshua Wong, who spoke remotely via a video call.

Taking the stand, Deputy Superintendent Lee Ting Wei, who took Wham's statement on Dec 20, 2016, said the event's Facebook page had shown there were 7,600 people invited and 366 had indicated interest in attending.

Wham, former executive director of migrant worker advocacy group Humanitarian Organisation for Migration Economics, was charged last November with a total of seven counts. He is currently a social worker with the Community Action Network.

In addition to the contested charges, Wham faces two sets of charges for organising other public assemblies without permits and refusing to sign police statements, along with one count of vandalism. However, they will be stood down for the time being.

Court papers said that on Nov 23, 2016, then Assistant Superintendent Gideon Manaseh contacted Wham and advised him to apply for a permit under the Public Order Act for the event, which was publicised on Facebook.

Any person who refuses to sign a statement he makes, when required to sign it by a public servant, can be jailed for up to three months and fined $2,500. 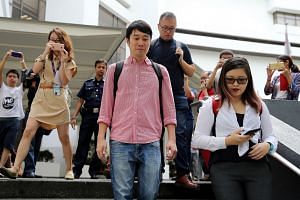 But Wham did not apply for a permit and knew no such permit was granted for the event at Midview City in Sin Ming Lane.

Two days after the event, a police report was lodged and DSP Lee, then an assistant superintendent, started investigations.

DSP Lee said that on Dec 20, 2016, Wham affirmed his statement taken on the same day to be true and correct, but refused to sign it after finding out he would not get a copy of it. Wham said it was his "personal practice" to sign a statement only if he would get a copy, said DSP Lee, who advised Wham that refusal might constitute an additional charge.

Section 180 of the Penal Code states that any person who refuses to sign a statement he makes, when required to sign it by a public servant, can be jailed for up to three months and fined $2,500.

During cross-examination, Wham's lawyer Eugene Thuraisingam said DSP Lee threatened Wham by telling him that he would be charged if he did not sign it. But DSP Lee said he "merely informed" Wham and did not threaten him.

The second prosecution witness, DSP Manaseh, said he contacted Wham three days before the event to ask if he had applied for a permit. DSP Manaseh knew a foreign speaker was slated to speak during the event.

Wham said he had not applied for a permit, and DSP Manaseh advised him to do so.

DSP Manaseh said Wham had said he would speak to his co-organiser, identified as Zeng Ruiqing in court papers, and get back with an answer. DSP Manaseh told Wham he would call back in an hour, but no one picked up the three calls the officer made.

A version of this article appeared in the print edition of The Straits Times on October 02, 2018, with the headline 'Wham told to get permit for event but did not: Witness'. Subscribe
Topics:
More
Whatsapp Linkedin FB Messenger Telegram Reddit WeChat Pinterest Print Purchase Article Copy permalink