Need to shed light on timing of hike, which comes amid slowing economy, rising costs

If the aim of the recent water price hike was to raise public awareness about Singapore's water demand and supply, the move can now be considered a splashing success.

Water talk flooded the Budget debate in Parliament for the second day in a row yesterday, with the Government offering more details on its decision in last Monday's Budget to raise water prices by 30 per cent over two years.

Minister for Environment and Water Resources Masagos Zulkifli said he could not provide exact calculations of the price rise due to "commercial sensitivities", but gave some insight on the process.

To meet growing water demand, he explained that Singapore will have to rely more on desalination even though it is more expensive than Newater, because there is a limit to how much used water can be treated in Newater plants.

And as Singapore becomes more urbanised, new and replacement pipes have to be built underground to minimise inconvenience to road users. This is two and a half times as costly as laying traditional pipes above ground, he said.

As a guide, Mr Masagos said Singapore's latest desalination plant cost 40 per cent more in its first year than the first desalination plant did in 2005. "With the 30 per cent increase that we have announced, the price will be close to, though still slightly lower than, the price of the next drop or the long-run marginal cost today. This is the best way to emphasise the scarcity value of water," he said.

Indeed, the outsized unhappiness over pricier water has highlighted the mismatch between Singapore's water insecurity and Singaporeans' growing complacency about cheap water.

For a generation that takes for granted the bountiful water flowing from their taps and are likely paying more for their cellphone bills than their water bills each month - as Mr Seah Kian Peng (Marine Parade GRC) observed - the hike is a timely reminder that Singapore has no natural water resources of its own. 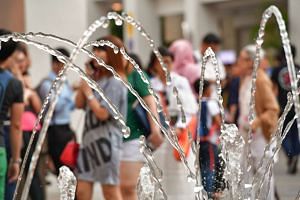 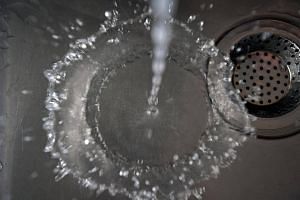 Water a critical asset that must be priced right, say ministers 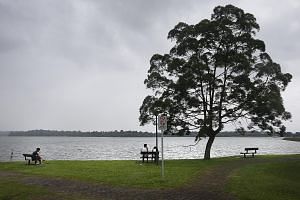 In fact, the Republic is the most likely in the world to suffer high water stress in 2040, Mr Masagos said, citing a report by the World Resources Institute.

Labour chief and Minister in the Prime Minister's Office Chan Chun Sing noted in Parliament that the "intense discussion" about the water tariffs "reflects that we have left this issue off our national psyche for too long". "We have to make sure that we never forget" that water is key to Singapore's existence, he added yesterday.

Both ministers were emphatic about the need to raise the price of water, even as some MPs rose to suggest other ways of encouraging water conservation.

Mr Seah called for periodic water-rationing exercises to drive home the value of water, while Mr Gan Thiam Poh (Ang Mo Kio GRC) asked the Government to consider opening up the water supply sector to more private sector players, and to borrow ideas from other countries on conserving water.

Mr Pritam Singh (Aljunied GRC) of the Workers' Party also had other proposals, including deepening the reservoirs to increase catchment of water, directly channelling Newater into homes, and giving rebates to households that have demonstrated water savings.

But Mr Masagos maintained that the best way to drill in the importance of water is to charge the full price of providing it.

"It is only through right pricing that we can have everyone valuing water as a strategic resource and consciously conserving it," he said.

He also noted that deepening the reservoirs may decrease the yield of these water bodies, but did not elaborate. And he dismissed the suggestion of offering rebates for saving water, calling it "counter- intuitive" to subsidise water use.

On supplying Newater directly to homes, Mr Masagos said the time had not yet come for that.

"Theoretically we can ,but we don't have to right now," he said. "And certainly when we need to, we will have to put the right processes to ensure this can be done because we must ensure that it is safe for our house to drink from end to end."

But he was less forthcoming on why the hike was implemented this year, when the economy is already experiencing slow growth.

The move comes on top of other cost rises such as higher charges at public carparks, diesel tax changes and a carbon tax starting in 2019.

In Tuesday's debate, Workers' Party Non-Constituency MP Leon Perera had suggested that the timing of these cost increases was motivated more by political than economic considerations.

Mr Singh yesterday asked about any link between the water price hike and PUB's annual net income, which he said has actually risen in recent years - implying less need to charge more for water usage.

Mr Masagos said the water accounts were more complicated, but left it at that.

Now that the price hike has focused the nation's attention on water issues, however, a better explanation on its timing would not go amiss. Water has always been scarce and crucial for Singapore - the Government should shed light on what tipped the scale this year.