SINGAPORE - Was Jonathan Chow Hua Guang attempting a stunt for a Snapchat video before falling to his death from a linkway between Orchard Central and Orchard Gateway?

A 15-second CCTV video of the incident circulated online shows Jonathan jumping over the railing last Friday (Feb 24), while a girl at the scene is seen holding up her right hand and then appearing to panic as she looks over the railing.

The girl - who only gave her name as Ruth - turned up at the wake on Monday (Feb 27) night and spoke about the circumstances leading to the incident, said Jonathan's friends.

Student Annetta Tian, 17, told The Straits Times that Ruth recounted how Jonathan had suggested that both of them should jump over the barrier at the linkway. They were then to take Snapchat videos of each other doing so.

"Ruth said both thought it was perfectly safe because the ledge next to the linkway looked like a concrete structure," said Ms Tian.

She said Ruth also refuted earlier eyewitness accounts, which described Jonathan as "vaulting"over the 1.2m railing of the fourth-storey linkway to retrieve a phone that had fallen on what appeared to be a ledge.

The ledge was actually a decorative plasterboard casing, which was not meant to bear loads. It collapsed when Jonathan landed on it. He fell to the ground, and later died in hospital.

Another friend, who wanted to be known only as Mr Haiqal, 20, said Jonathan and Ruth met through social media and had gone out several times before the incident.

Family and friends of Jonathan paid tribute to him at Monday's wake in Punggol Central. 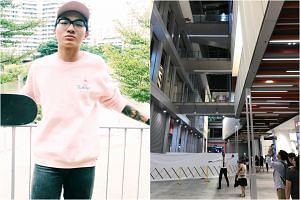 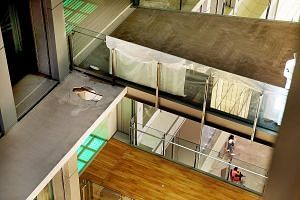 "He was a friendly guy, sociable and approachable... he was about to be enlisted for national service and was looking forward to it, but now he won't be able to serve the nation," said his father Matthew Chow, who declined to reveal his age and occupation.

Mr Chow said news of the accident came as a great shock to the family of five, including Jonathan's older brother and younger sister.

Jonathan's friend Nur Adlina, 16, described him as "someone who lived life with no regrets". They got to know each other four years ago, when they attended neighbouring secondary schools here.

"I was being bullied and he was trying to help me out," she said about Jonathan, who left to study in Australia two years ago.

Mr Chow declined to say if the family had spoken to Ruth. But he added that while Jonathan had been skateboarding since around age 12, he was not an active participant of parkour - a sport involving climbing and jumping over obstacles - at least as far as the family was aware.

But Mr Chow asked if more could be done to prevent future similar incidents. On Monday, he visited the linkway at the mall with his older son, where they also spoke to Orchard Central staff.

"The (decorative structure) was wide enough to look like a passage way, and there was no warning sign to tell people that it should not be walked on. We don't want other families to go through what we went through," he added.

Far East Organization said last Saturday that it is reviewing with its building consultants if any other safety measures, in addition to the glass barrier, are required.

Meanwhile, its security officers will be patrolling the various link bridges at more frequent intervals, and the link bridge in question is currently closed to the public.