This announcement follows the release of an annual population report last Thursday, which showed that Singapore's total fertility rate fell to a seven-year low of 1.16 last year, far below the replacement rate of 2.1.

In a press statement, ILC said it has identified several areas to target in the study.

As part of the study, ILC will also conduct research on the different methods of fertility treatments, including the subsidies available and waiting times at both public and private hospitals.

Said ILC president Joni Ong, 58: "We invite key stakeholders, organisations, communities and couples with their own stories to come forward, share your insights and take part in this conversation."

She added that ILC plans to speak to as many couples as possible, gather insights from experts such as doctors and sociologists, as well as engage with private-sector and government representatives. 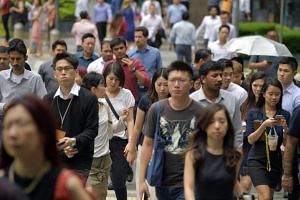 One in five married couples here, she noted, is affected by fertility issues.

"We have heard so many stories of couples facing issues with conception and we believe this is a nationwide issue. So we hope this study will identify the challenges regarding conception and explore possible solutions," she said.

ILC has been running the annual Know Your Fertility Wellness campaign for the last three years, to educate the public about the importance of fertility health.

This year's campaign, which ran last month, involved 200 fertility health checks given to couples, as well as a roadshow with fertility-related talks by experts.

An interactive vending kiosk was also launched to provide information related to topics such as fertility, finances and work-life matters to tertiary students.

This kiosk was located at Nanyang Technological University from Aug 28 to last Wednesday, and at the Singapore University of Technology and Design from last Friday.

ILC's free-roaming Truck-on-the-Go, another new initiative that educates visitors on managing one's finances and understanding fertility issues, also appeared at Century Square mall on Sept 14, and at Hillion Mall last Saturday. It will make stops at more areas this month and next month.