SINGAPORE - Many of the pieces are already in place within communities to tackle long-term absenteesim among students but better coordination and volunteers to reach families are needed, said Second Minister for Education Indranee Rajah on Saturday (Jan 26).

Specialised agencies like the Social Service Office or family service centres can provide financial assistance or counselling, and teachers can follow up in school, but there also needs to be people who can do the last mile work which is to meet the families.

She made the points after joining discussions at a public engagement session organised by Uplift (Uplifting Pupils in Life and Inspiring Families Taskforce).

Ms Indranee, who chairs the taskforce, told reporters after the event that some of the solutions suggested were the befriending and mentoring of families. This could involve volunteers accompanying younger children to school if their parents are unable to, or helping to motivate older children to go to school.

She said that the taskforce will look at how to implement a good framework for referral of cases, as well as for the coordination of assistance and volunteers.

About 80 people including school principals, youth leaders and voluntary welfare organisation representatives participated in the session at the Ministry of Education in Buona Vista to discuss community strategies that could be implemented alongside school efforts.

It was the fifth public engagement session by the taskforce, which was set up late last year to boost support for students from lower-income households

Ms Indranee said that previous sessions were about identifying issues, while Saturday's session focused on solutions.

Minister of State for Social and Family Development Sam Tan, who is also a taskforce member and was at the session, encouraged participants to tap the resources available in their locales, such as grassroots networks. "It takes a constituency to raise a child," he quipped. 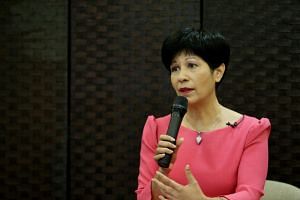 Call to give more guidance, support to disadvantaged kids

Look beyond education to give disadvantaged kids a leg-up

Participant Martin Chok,  senior manager for youth services at voluntary welfare organisation Care Corner, said a mentoring programme could provide longer-term support for families. It could take the form of a pat on the back for a single parent working hard to pay the bills, for instance.

"Students going back to school after a long absence of three or four months may need encouragement as they may have trouble catching up with school work, or their friends may have changed," he added.

Mr Carlos Andres, a National Serviceman, said schools could refer students to caseworkers who could then link them up with volunteers recruited by self-help groups.

Such a befriender programme could be more sustainable than short-term help, said the 24-year-old, who was referred to a three-month engagement programme when he was in Secondary School as he had a poor disciplinary and academic record and no strong support system at home.

"Familes are getting smaller and there are more single parents, so we need to pull in the community to fill these roles," he said.

Details of Uplift's recommendations will be announced and implemented this year. They will be tracked and evaluated over a one- to two-year period to ensure they are effective, said the Education Ministry.