When the Jurong Lake Gardens is finally complete and open to the public, it will showcase a new type of green lung in Singapore's largest regional hub outside the city centre.

The National Parks Board (NParks) yesterday gave a glimpse of the idyllic charms the area could offer, and called a tender for consultants to design the central and eastern parts of the gardens.

NParks said it envisioned the area as a "people's garden" to complement Jurong Gateway, the commercial hub of Jurong Lake District. 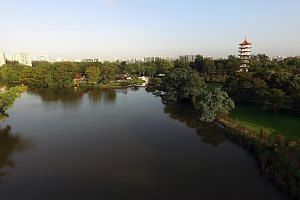 Integrating tech and nature in Jurong 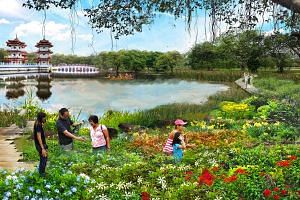 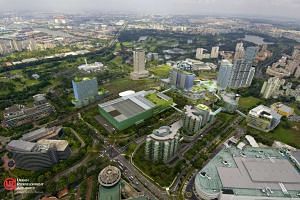 The central area, which consists of the Chinese and Japanese gardens, and the east side, which will house the new Science Centre, will be completed in phases from 2020.

NParks wants the concept designs for all three to gel with one another. Among the suggestions are plans to revive gardening as a pastime by getting people to create "show gardens" and display their horticultural expertise.

The new Science Centre, which will have a 15m-wide promenade fronting it, will also have the gardens as a teaching tool.

"The outdoors of the Science Centre can feature science-based play," NParks said.

Those who work at the commercial hub next door will not be forgotten. NParks said it wants the gardens to offer respite to office workers and a green space for businesses to network. The gardens will also feature smart technology and serve as a test bed for green industries and their products, it said. This could include trials for driverless vehicles.

Plans for Jurong Lake Gardens West already flagged include having paths lined with local versions of "cherry blossoms" such as the Malayan crepe myrtle.

The submission of proposals for the latest tendercloses on April 25. NParks will shortlist five firms to participate in the second stage of the tender process in June. A firm will be appointed by year end.

Over 17,700 suggestions, some calling for the retention of existing nature hot spots and the provision of basic amenities - were gathered from a public engagement exercise last year. These will be included in the project brief for shortlisted consultants in the second stage of the tender.

Some Jurong residents are already calling the gardens the "jewel of the west". Said customer service manager Siow Wei Hoong, 27: "I'm glad we'll have a Gardens by the Bay in the west. It gives me, my family and loved ones something to look forward to."

A version of this article appeared in the print edition of The Straits Times on March 08, 2016, with the headline 'Vision of a 'people's garden' at Jurong Lake'. Subscribe
Topics:
More
Whatsapp Linkedin FB Messenger Telegram Reddit WeChat Pinterest Print Purchase Article Copy permalink