The woman who died after being hit by a falling tembusu tree at the Botanic Gardens last Saturday was an inspirational leader who garnered huge respect from all who knew her.

Ms Radhika Angara, 38, was at the Gardens with her family when the 40m-tall tree came crashing down, pinning her down.

Her French husband, Mr Jerome Rouch-Sirech, 39, and their two children, one-year-old twins, were also injured in the incident.

Ms Angara, an Indian national, was most recently regional digital marketing head for the Asia-Pacific at MasterCard. She took up the role after leaving global social and mobile payment platform Fastacash last year, where she was chief marketing and strategy officer.

Ms Angara studied at the University of Pennsylvania and Ithaca College in the United States.

Her family members declined to comment when The Straits Times visited them at the funeral parlour. 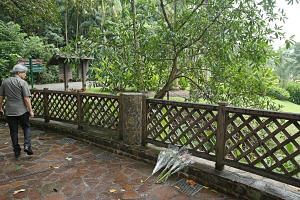 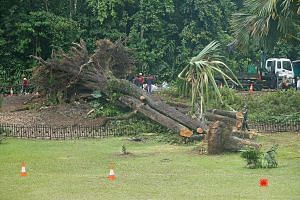 'Not likely' tree fell owing to lack of space

In a message, Fastacash chief executive officer Mark Carter said Ms Angara was a pivotal member of the management team and "an inspirational leader who garnered huge respect from all who knew her".

"Radhika was always there to support colleagues through the Fastacash journey and will be deeply missed. Our condolences and deepest sympathies go to her family at this sad time," he added.

"(Radhika) had an energy and warmth that won her the respect of her peers and managers alike," said Ms Tan.

She added that Ms Angara was "a highly talented professional, a rising star in her field and a valued member" of the Asia-Pacific marketing and communications team.

"She will be deeply missed."

The Straits Times understands that her husband, Mr Rouch-Sirech, was discharged from National University Hospital (NUH) last Saturday night. According to his LinkedIn profile, he heads retail at Puma South-east Asia.

The family's home is believed to be a three-room condominium in the central part of Singapore.

A 26-year-old Singaporean woman was also injured in the incident that took place at least 50m away from the Shaw Foundation Symphony Stage. Her name is Ms Tay Pei Lei and The Straits Times understands that she has also been discharged from NUH.

A version of this article appeared in the print edition of The Straits Times on February 13, 2017, with the headline 'Victim was 'inspirational leader respected by all who knew her''. Subscribe
Topics:
More
Whatsapp Linkedin FB Messenger Telegram Reddit WeChat Pinterest Print Purchase Article Copy permalink