Some users of new psychoactive substances (NPS) such as Spice, K2 and Magic Mushrooms become paranoid and psychotic; others see their blood pressure or heart rate shoot up to life-threatening levels.

There is a real danger of suffering a stroke, organ failure or serious mental problems, and even dying, warn doctors and counsellors who have treated NPS users.

Said Dr Lambert Low, an associate consultant with the National Addictions Management Service at the Institute of Mental Health (IMH): "You are playing with death when you take NPS. You really don't know what is inside them, and they could be mixed with industrial chemicals."

Last year, Dr Low and Dr Christopher Cheok, who is also from IMH, published a paper in the Singapore Medical Association's newsletter in order to educate doctors here about such substances.

They did so after some accident and emergency doctors asked them about the substances, suspecting that some patients' conditions could be due to drug use.

You are playing with death when you take NPS. You really don't know what is inside them, and they could be mixed with industrial chemicals. 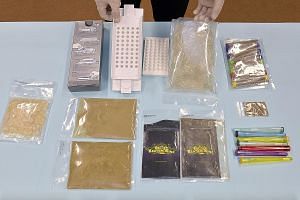 'Don't start; you don't know what you are messing with'

With these patients, the blood pressure shot up to dangerous levels, their hearts were beating too fast, or they were hallucinating and paranoid, and the doctors treating them could not figure out a medical reason for the symptoms.

Dr Munidasa Winslow, who specialises in treating addictions, says that NPS are even more dangerous than older drugs such as marijuana and Ice, as much more is known about these substances.

He has patients who became paranoid after using NPS, convinced that others were out to spy on them or hurt them. He noted that the nasty effects from the NPS they used were more severe than those from older drugs.

NPS mimic the effects of older drugs, and are made by slightly modifying the chemical structures of drugs such as marijuana, making them hard to detect.

Hence, their popularity is growing among teens and young adults who want to get high but not get caught by the authorities for abusing drugs, say drug counsellors.

One drug counsellor, who declined to be named, said he once sent 12 urine samples to be tested. None came back positive for NPS, although a handful of the people tested confessed to using them.

Another reason for their rising popularity is that some young people think NPS are not addictive.

Said programmes manager Robin Tay at The New Charis Mission, which runs a halfway house: "They think they can control their usage, and even say (to other addicts), 'I'm not like you - I'm not a heroin addict'."

Polytechnic student Sam (not his real name) tried Magic Mushrooms twice while he was holidaying in Bali last year. The 20-year-old was curious, and the NPS was easily available on the Indonesian island.

Sam, who has used marijuana here, said: "I just wanted to try it, and I wouldn't have if I had thought that I would get hooked."

He said the drug made him hallucinate for six to seven hours, and it was a strange experience.

Counsellors say that NPS is often used during parties where people mix alcohol and drugs to get high and go really wild.

Mr Anson Yoo, who is director of the HCSA Highpoint Halfway House, said the emergence of NPS means that drug counsellors must keep themselves up to speed with these substances, and must be more vigilant in spotting NPS usage among the addicts they help.

He said: "You know it's there as users clearly show something amiss about them, but you can't quite catch it (in the urine test)."