It is the prerogative of the United States to take in people who engage in hate speech, said the Ministry of Home Affairs (MHA), following news that the US has granted teenage blogger Amos Yee asylum. Here is the MHA's statement:

In 2015, Amos Yee was charged for engaging in hate speech against Christians.

He had said "Christians… are… power hungry and malicious but deceive others into thinking that they are compassionate and kind. Their impact and legacy will ultimately not last as more and more people find out that they are full of bull… Similar to the Christian knowledge of the bible, and the work of a multitude of a priests."

He was convicted on the charge. He was also convicted on another charge for publishing an obscene image. He was sentenced to a total of four weeks' imprisonment for these charges.

In 2016, Yee was charged again for hate speech, this time against Muslims and Christians. 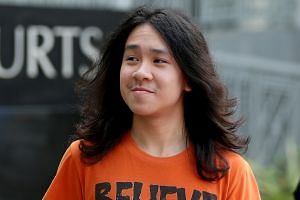 There are many more such people, around the world, who deliberately engage in hate speech, and who may be prosecuted. Some of them will no doubt take note of the US approach, and consider applying for asylum in the US.

THE MINISTRY OF HOME AFFAIRS

He had said "the Islamics seem to have lots of sand in their vaginas too… But don't mind them, they do after all follow a sky wizard and a pedophile prophet. What in the world is a 'moderate muslim'? A f*****g hypocrite that's what!… With all due respect, Christians, you can shove that faith up your a**. Faith! Faith! I'd be damned at this retardation of humanity. F**k you, Christian sh***".

He pleaded guilty to the charges, and was sentenced to six weeks' imprisonment and a fine of $2,000. He was represented by counsel in both the 2015 and 2016 proceedings.

Yee had engaged in hate speech against Christians and Muslims.

The US adopts a different standard, and allows such hate speech under the rubric of freedom of speech.

The US, for example, in the name of freedom of speech, allows the burning of the Quran .

Singapore takes a very different approach. Anyone who engages in hate speech or attempts to burn the Quran, Bible, or any religious text in Singapore, will be arrested and charged.

The US Department of Homeland Security had opposed Yee's asylum application, on the basis that Yee had been legitimately prosecuted.

A version of this article appeared in the print edition of The Sunday Times on March 26, 2017, with the headline 'US' prerogative to take in Yee, says MHA'. Subscribe
Topics:
More
Whatsapp Linkedin FB Messenger Telegram Reddit WeChat Pinterest Print Purchase Article Copy permalink