The plan by former Malaysian premier Mahathir Mohamad to put together a loose alliance to topple Prime Minister Najib Razak is being watched closely as the latest unexpected move by a veteran of political battles.

Tun Dr Mahathir wants Umno leaders, opposition veterans and well-meaning intellectuals to get a wider public consensus on why the embattled Datuk Seri Najib, who is trying to fight off a huge financial scandal, is bad for the country.

Dr Mahathir resigned from Umno on Monday, the second time he had quit the party in nearly seven years. 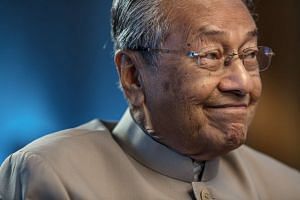 "(The resignation) will make it easier for him to become the torch for every citizen who wants to save Malaysia from Najib's greed for power," wrote former newspaper editor and Mahathir supporter, Datuk Abdul Kadir Jasin, in his blog on Monday.

For more than a year now, South-east Asia's third biggest economy has faced international scrutiny as its institutions - the police, the Attorney-General's office, central bank and anti-corruption commission - grapple with investigations involving the Premier.

Where did the US$681 million (S$955 million) found in Mr Najib's bank accounts come from? Worse, US newspaper Wall Street Journal is claiming that there was more than US$1 billion in his accounts at one point.

Did the money come from state fund 1Malaysia Development Berhad (1MDB)? Or was the late Saudi King Abdullah the generous donor?

While Attorney-General Mohamed Apandi Ali has exonerated Mr Najib in the case, the Swiss and Singapore authorities have signalled misappropriation in 1MDB. A big worry for Malaysians following the case is that the longer the scandal drags on, the more it will hurt the image of the Prime Minister's office as well as weaken the country's national institutions.

Mr Najib's younger brother, banker Nazir Razak, wrote in his Instagram account last month that the future "terrifies" him. "I just can't see how our institutions can recover, how our political atmosphere can become less toxic, how our international reputation can be repaired," Datuk Seri Nazir wrote.

Dr Mahathir has quit Umno again to shock Malaysia's biggest political party, Umno, and Malaysians, into doing something about it.

He is moving a big piece on his chessboard in his willingness to work with the opposition, and wants to persuade more Umno leaders to join his "core group" of anti-Najib dissenters. But the 90-year-old statesman faces several uphill battles. Apart from the almost-impossible mathematics of trying to get some two dozen MPs of the ruling Barisan Nasional (BN) coalition to jump ship in Parliament, he must know that Umno is battle-weary.

The Umno-led BN lost its two-thirds majority in Parliament in the general election in 2008, and five state assemblies, due to Umno's internal struggle to oust then Prime Minister Abdullah Badawi.

The opposition hopes for a power-sharing deal once Mr Najib is toppled. But Dr Mahathir only wants to get rid of Mr Najib.

Mr Najib is the third sitting prime minister that the veteran statesman has fought - he had raised cudgels against Malaysia's first prime minister, Tunku Abdul Rahman, and Tun Abdullah.

To some though, there should be less politicking and more focus on Malaysians who are struggling with bread-and-butter issues.

"I hope in the future we can do less politicking and focus on efforts to bring up the people," said former Selangor menteri besar Khalid Ibrahim yesterday, when asked about Dr Mahathir's resignation.