As the single mother of three children - two of whom have severe disabilities - Ms Rozanah Roza struggled with depression, but managed to get back on her feet and wants to give back to society. This is the latest in a series on millennials who overcame the odds.

Up to the age of 24, Ms Rozanah Roza lived a charmed life.

But in June 2012, days before her 25th birthday, scans revealed the twins she was pregnant with had serious brain defects that were incurable.

Her marriage ended two years after they were born, leaving her, at 27, a single mother of three children, two of whom needed constant care.

But today, Ms Rozanah, 32, who runs her own manicure business in Tanjong Pagar, is back on her feet and keen to give back to society, especially to parents of children with special needs who may be going through the challenges she did.

"I want people to know that it is okay to be a mother with a special child, or a single mother," she told The Straits Times. "If I can do it with two, so can you."

Ms Rozanah grew up in a relatively well-to-do home as the oldest of three children. Her father had a catering business and her mother helped him. "I was born with a silver spoon in my mouth," she recalled. "My parents never forced me to do anything I didn't want to do."

She was, by her own admission, stuck-up and aloof. "In school, if I felt you weren't at my 'standard', I wouldn't talk to you," she said.

She met her former husband at 13. They were engaged at 19 and married at 21. He was a prime mover driver and she worked as a manicurist. They were doing well enough to buy a flat and a car, and the arrival of her firstborn, Rizq Ayser, was the icing on the cake.

She had a splashy baby shower and a maternity photo shoot. "Everything was perfect for a small family like ours," she said.

She subsequently had a miscarriage before becoming pregnant with the twins. About 24 weeks into her pregnancy, she began to bleed. After multiple scans, doctors told her the brains of her babies had stopped developing.

But when they were born, one looked normal and healthy while the other was tiny, weighing just 1.1kg. "Even the diaper was bigger than him," she recalled.

Further scans revealed both were equally ill, and would remain that way for the rest of their lives. She remembered the blunt words of a healthcare worker after one of her many scans: "Your child is as good as retarded."

It was at this point that she began to have suicidal thoughts. "I thought people were going to laugh at me or say that I deserved it. I thought maybe we (she and the twins) should just jump and die together. All the time, I was asking: 'Why me?'"

It was difficult to break the news to relatives. She took a year to let her in-laws know her children had special needs.

But even in the depths of depression, Ms Rozanah said, she knew she had to pick herself up because her children depended on her.

The twins, Rian Adrin and Rian Afreen, are now eight years old. They have microcephaly and lissencephaly, meaning their heads are smaller and their brains smoother than normal.

They cannot walk, talk or see, and will always need help with everyday activities, such as eating and using the toilet. One is on regular medication to prevent him from having epileptic fits.

Doctors are not able to give her a definite prognosis about the twins, but Ms Rozanah compared them with American sisters Lola and Claire Hartley, both of whom had microcephaly. Their mother documented their lives in blog posts up until they died - one at 13, the other at 17.

"I am prepared for them to go. We don't know how much they are suffering," Ms Rozanah said of her own children. "It's a matter of time. They may decide to stop breathing, and that's it."

Although breastfeeding was not easy for her - she stopped at two weeks for her oldest child, who is now nine - she soldiered on for a year as the twins needed it. Once, she was so exhausted she nodded off at the wheel of her car at a traffic light.

When the twins were two, Ms Rozanah divorced her husband, whom she felt was not supportive. He now sends her $200 for each child every month, although he rarely visits to see his children.

Her two subsequent relationships did not end well. The first man was arrested for drug abuse and, while he was in jail, she began to see another man but that came to nought too.

Her children are now her one and only priority, she said. "It takes a very strong man to take care of me and my children."

Ms Rozanah eventually sold her home and car, and moved to live with her parents in Woodlands. It was the support of family and friends that helped her get back on her feet, she said. 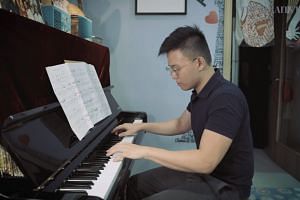 Generation Grit: Hearing loss did not stop him from achieving musical success

Generation Grit: Beating a nightmarish past to fulfil her childhood dream

Those who knew she was in need sent her gifts of diapers and formula milk. When she was struggling financially after the twins were born, a cousin gave her $15,000 he had saved for his wedding. "He allowed me to pay him back, bit by bit, over four years," she said.

The need to care for her twins has taught her patience, perseverance, humility and gratitude for the small things in life, she said.

"I used to grumble a lot when I was pregnant with them because I couldn't eat or sleep comfortably," she recalled. "But after having them, my mindset and personality changed. Even if you have just a plate of rice with kicap (soya sauce), you have to be very thankful."

In her children, she has also found a new sense of purpose.

"I was a person so engrossed with the world that, at times, I forgot I was a mum," she said. "But as I got older and they got bigger, I told myself I should give them the best.

"If there comes a day when they leave me, I know I have given my best, my 100 per cent," she said. "The task that was given to me, I did it properly, and that makes me happy."

Her Indonesian maid - who has a child with special needs herself - takes care of the twins when Ms Rozanah is at work, and her parents and two younger brothers pitch in when she needs an extended break.

She also has a group of close friends from secondary school playing the role of father to her oldest boy. "They play with my son; they take him swimming," she said. "They treat me like a younger sister, and their wives all know me. One of their wives is now my best friend."

Among her close friends is Mr Rozaily Aswadi, 33, a prime mover driver, who has helped open business doors for her. They are working on a charity project.

"We were not that close in secondary school. She was not so talkative then," he said, adding that she became a more caring friend and focused mother after her divorce.

"I have a family, too, and I can't imagine how my wife would have to struggle if she was in her shoes," he said. "What I can help her with, I do my best. She's very strong."

In 2018, a friend helped Ms Rozanah set up a business selling make-up. It failed, but he encouraged her to press on and invested $10,000 in her next business venture.

The result was Alpha Chic, the nail salon she set up later that year.

Another major achievement was being able to go on holiday with her firstborn to Kuala Lumpur last December. "I don't have a lot of time for my oldest. I owe him a lot," she admitted. "I have missed some milestones."

Once, at work, she overheard him telling one of her employees: "I'm so lonely at home. My brothers are sick and I don't have any friends."

At present, Ms Rozanah volunteers with Abam Abam Trailer, a group of prime mover drivers who have banded together to do community work, like helping the homeless with basic necessities.

She also hopes to offer support to mothers struggling to raise their children with special needs, and has started a YouTube channel to document her experiences.

"I want to tell people that you can give back, even when you have very little," she said.