More targeting students with fliers and freebies such as food; schools monitoring the situation

More tuition centres are distributing eye-catching fliers and uncommon promotional materials - such as foolscap pads, bubble tea and even breakfast sets - outside the gates of schools, which are now keeping a close eye on the situation.

Some centres do it themselves, while others outsource the work. The centre staff or hirees can usually be seen outside brand-name schools, including Hwa Chong Institution (HCI) and Raffles Institution (RI), during examination seasons.

Those who are hired to distribute such materials earn about $20 an hour. They can start as early as 6.40am and leave an hour later.

When The Straits Times visited HCI last Wednesday morning, a woman dressed in black was seen outside the gate near Tan Kah Kee MRT station, giving out some 200 fliers advertising a centre.

The woman, armed with two tote bags of fliers, began distributing them from 6.55am. She left in a taxi nearly an hour later.

HCI said it is aware of tuition centres' marketing efforts outside its school compound, but has not received any complaints so far from students or members of the public.

"We are monitoring the situation to ensure that there is no security and safety threat posed to the school community," HCI added. 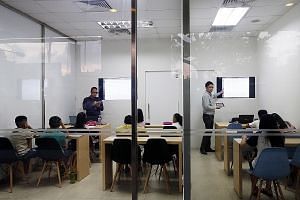 Tuition industry worth over $1b a year

More often than not, word-of-mouth referrals from friends and relatives are more effective than mere physical appearances or marketing gimmicks.

ECONOMICS TUTOR ANTHONY FOK, president of the Association of Tutors (Singapore), on the marketing efforts outside schools.

Centre operators told ST that distributing fliers or other materials outside schools allows them to be more targeted in reaching specific student groups.

Real Education Centre, for instance, distributes postcard fliers as well as "seasonal specials" such as McDonald's breakfast sets to junior college students outside their schools. The centre distributes such items almost every month.

Mr Keng Jun Hao, 25, the centre's managing director, said the specials attract students and boosts "brand recall". He added that his centre, started in 2009, was among the first few to distribute materials outside school gates.

But competition is hotting up. "Nowadays, we have to compete with at least two or three others distributing (materials) outside school gates," he said.

Mr Eugene Toh, 29, founder of Economics At TuitionGenius, said his centre hands out free foolscap pads, breakfast sets and bubble tea. It has distribution exercises outside nearby schools every fortnight, either before or after school.

"Typically, there will be two or three centres giving out such materials every day," he said, noting however, that most of his students go to the centre because of friends' recommendations rather than such marketing exercises.

Still, Mr Toh added: "Although the impact is minimal, we do it for brand exposure."

Another centre, Captain Mathematica, hands out foolscap pads, name cards and fliers with motivational quotes, mainly at junior colleges before or after school.

Centre founder Timothy Lim 29, called such materials "practical", adding: "We do this with the hope that students will use them or keep them for future reference."

Scoring well in exams is a national obsession. The shadow education, or tuition, industry here is worth more than a billion dollars annually, almost double the $650 million spent in 2004.

Some parents reportedly spend several thousands of dollars on tuition for their children each month.

Students said it is common to see individuals distributing materials promoting tuition centres outside their schools. When asked if they could remember the names of the centres, many were unable to.

An RI student, 17, who declined to be named, said some of his peers would throw the fliers away.

But he added that the marketing effort is sincere, and is "a reminder that academic help is available".

Economics tutor Anthony Fok, president of the Association of Tutors (Singapore), said giving out promotional materials outside schools may help students make more-informed choices. But the 33-year-old believes most students and parents remain rational, and would consider the tutors' qualifications, experience and ability to deliver results.

"More often than not, word-of- mouth referrals from friends and relatives are more effective than mere physical appearances or marketing gimmicks," he said.