SINGAPORE - The bill for hosting the historic Trump-Kim summit will come up to about $20 million, said Prime Minister Lee Hsien Loong, adding that this is Singapore's contribution to an international endeavour that is "in our profound interest". "It is a cost we are willing to pay," he said, adding that security costs would account for about half that figure.

Speaking to the Singapore media on Sunday (June 10) during a visit to the international media centre, Mr Lee noted that the summit is a very major operation, due to - among other things - its scale, the number of journalists here to cover it and the level of security required.

The security requirements are much higher than for previous meetings because of the profile of this summit and the nature of what is being discussed, he added.

Delving into some of the details, he said it involves not just cordons of policemen around the meeting venue but "all-round protection and in-depth protection - air, sea, land, against attack and against mishap".

"So this is a very major operation, because it's a high-profile meeting and we cannot afford to have anything go wrong."

Mr Lee also said Singapore might be able to recoup some of the costs of hosting the summit. Asked to elaborate, he replied: "If you calculate the price of everything in this world, you will miss out on the real important things. And in this case what is important is that the summit is held, and we are hosting it, not extravagantly but with due consideration to costs, but making sure operational requirements are met."

Besides the security bill, another substantial part of the costs is from facilitating the 2,500-strong contingent of journalists here. A Ministry of Communications and Information source said that this - including the set-up of the international media centre at the F1 Pit Building - comes in at around $5 million.

The $20 million bill for the summit is a fraction of the $150 million spent each year to host past editions of the Formula One race. 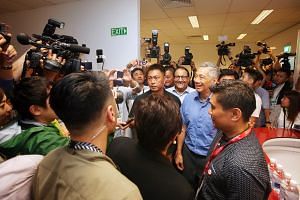 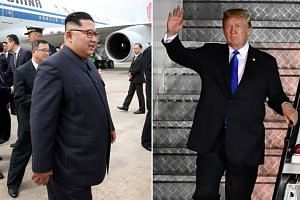 The issue of cost has, however, raised questions among some Singaporeans, who have also chafed at having to contend with restricted access and road closures.

Asked about this, Mr Lee said that what is important to keep in mind is the significance of the summit and also what hosting it successfully could mean for Singapore.

It is, he said, not just a whole-of-government effort, but a "whole of Singapore effort", involving people ranging from press officers to bomb disposal unit experts.

It also includes ordinary Singaporeans whose lives have been "a little bit inconvenienced because roads have been cordoned off and traffic jams can happen - I hope you will understand this is for a good cause, it is a national effort, and I hope we will all be able to work together to show the world what Singapore can do".

On Sunday, Mr Lee also visited Singapore Armed Forces troops deployed at Palawan Kidz City on Sentosa, and the Home Team command post in Novena. "The officers have done a good job under very pressed circumstances," he said, pointing to the short notice given. It was only two weeks ago that it was confirmed the summit was going ahead.

It is not easy to find a suitable location to host such a meeting, observed Mr Lee, as both the Americans and the North Koreans must agree on a venue that meets their requirements and is politically and diplomatically acceptable to them.

"Therefore, when the two sides asked us to host the meeting, we cannot say no," he said. "We have to step up... We can do a good job."

The summit is a plus for Singapore, in terms of its reputation, its standing and "how people look at us", he added. "It gives us publicity. The fact that we have been chosen as the site of the meeting - we did not ask for it, but we were asked and we agreed - says something about Singapore's relations with the parties, with America, with North Korea, also our standing in the international community."

Singapore is one of the few countries that have diplomatic relations with both sides. Mr Lee added: "I think people will sit up and say, why is this meeting happening in Singapore, and they will draw their conclusions, and they will see how things are run. And I'm sure that we will be able to show what Singapore can do, so I think it's a plus for Singapore."