Preparatory works under way; 3 new stations along 4km extension will reach new commuters when ready in 2025

Tenders for the civil works are expected to be awarded by the year end, and construction will begin in the first quarter of next year, the Land Transport Authority said late on Tuesday.

The 4km extension is expected to be completed in 2025 and will have three stations - Keppel, Cantonment and Prince Edward.

The extension project is expected to cost $3.7 billion, with the Government stating in its latest Budget book that the advanced works would cost $30.6 million.

The total cost translates to $925 million per km - more than three times the cost of the existing Circle Line, which cost an average of $300 million per km when it was completed in 2011.

Separately, another $2.3 billion has been allocated to expand the Kim Chuan depot to stable more trains that the extension will require.

The three additional stations will reach out to new commuters. 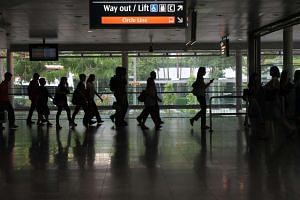 For example, Keppel station will serve commuters at Keppel Distripark, while Cantonment station will be near Tanjong Pagar Railway Station and offer access to Spottiswoode Park Estate.

The Prince Edward station will be near Palmer Road, where heritage landmarks are.

The extension will also serve part of the Greater Southern Waterfront, a massive mixed-used development that will commence once the Tanjong Pagar, Keppel and Brani port terminals are relocated to Tuas after their leases expire in 2027.

Besides reaching new commuters, the extension will allow those travelling between the south-western and south-eastern ends of the line - such as from Pasir Panjang to Nicoll Highway - to have more direct and quicker access.

Commuter Ashley Wu, 37, said any new MRT line or extension will be beneficial to all commuters.

"Personally, I have cut down on taxi rides since Downtown Line 2 opened last year," said the sales and marketing manager who lives in Bukit Panjang.

"The only issue is the traffic problems MRT construction would cause," she added.

"However, the end result outweighs the inconvenience."