While transfers between MRT lines are typically made within the paid area of stations, commuters going from the East-West Line to the new Downtown Line 3 (DTL3) at Tampines will have to exit and re-enter the system.

The density of Housing Board flats in the area made it difficult for the Land Transport Authority (LTA) to build the two stations any closer. So, to make the transfer, commuters will have to tap out, walk about 300m via a sheltered public linkway and tap in again through new fare gates.

Commuters will be charged only for a single journey, provided they complete the connection within a 15-minute grace period.

The new Tampines station on the DTL3 will open on Oct 21 with 15 other stations. This will extend the existing Downtown Line, which runs from the north-western parts of Singapore to the central area, 21km eastwards.

Tampines will be the third interchange station on the network, after Newton and Bukit Panjang, which requires commuters to tap out and tap in again to make a transfer. Transfers at the 22 other interchanges, including the DTL3's MacPherson and Expo stations, are made seamlessly within the transit area.

The LTA said that to align the two stations closer together, train tunnels would have had to be built under several HDB blocks. "In order not to affect the HDB buildings, we had to find another corridor, which placed the station farther away. As such, the station was constructed at the nearest feasible location that allowed commuters to transfer lines easily," said the LTA's deputy group director for infrastructure design and engineering, Ms Choo Chai Foong. 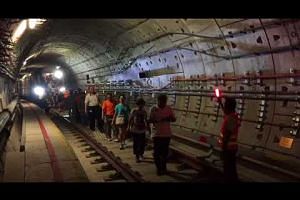 The Sunday Times tried out the walk last week. It took 6min and 47sec, walking at a relaxed pace, to make the 300m transfer between the East-West Line and DTL3.

The LTA said that to make the walk a smoother one, it took possession of a 200m public linkway previously managed by the town council. Retail pushcarts, which lined the pathway, have been removed, creating an 8m-wide path.

Tactile tiles have been installed on the floor to guide blind commuters, while the path between the two stations has been made barrier-free with directional signs placed along it to guide commuters.

Tampines residents said the transfer process was a minor hassle and welcomed the improved walkway.

Ms Geraldine Li, 26, a nurse, said: "Five minutes would be enough to make the transfer, but it could take a bit longer if it was crowded."

Madam Soemiati Kendra, 75, a retiree, said in Mandarin: "The linkway is less cluttered now and easier to walk along."

But insurance agent Gerald Lee, 44, is hoping for a longer grace period. "Since this transfer creates some inconvenience for us, how about giving us a longer grace period of 30 minutes? With a longer time, maybe we can pick up some breakfast on the way. This can also encourage more people to use the MRT."

A version of this article appeared in the print edition of The Sunday Times on September 17, 2017, with the headline 'Walk 300m to tap in to Downtown Line at Tampines station'. Subscribe
Topics:
More
Whatsapp Linkedin FB Messenger Telegram Reddit WeChat Pinterest Print Purchase Article Copy permalink