A nine-month-old Vietnamese start-up is hoping to carve a place for itself in Singapore's ride-hailing scene, which is currently dominated by industry giants Grab and Gojek.

FastGo said on Wednesday that it aims to launch services here at the end of next month, and will begin registering drivers on April 1.

The initial fleet size will be at least 3,000 cars on the roads here, FastGo Singapore country manager Diep Nguyen told The Straits Times.

FastGo currently operates in Vietnam and Myanmar. It plans to launch in five other countries in the region, such as Indonesia and the Philippines, by the end of this year.

Ms Nguyen said the firm invests an initial sum of about US$3 million (S$4 million) in each new market.

Referring to competition from Grab and Gojek, she said FastGo was "competing with them well" and that it would learn from its rivals' "experience and weaknesses to provide good policies and services for commuters and drivers". 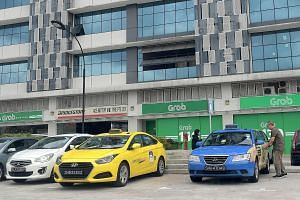 In response to queries, a Land Transport Authority (LTA) spokesman said: "We are working with FastGo to help them understand and operate in accordance to the local regulatory requirements."

The LTA spokesman added that all prospective private-hire car service operators must comply with existing regulatory requirements before being allowed to operate here.

FastGo aims to differentiate itself from Grab and Gojek - both of which collect a fee of about 20 per cent per fare from drivers - by charging them a daily subscription fee of less than US$5 if a driver's income exceeds US$30 a day.

"If they can do more for drivers such as providing insurance coverage and helping with Medisave, it will enhance their attractiveness and assure commuters that this new app has a big pool of drivers to serve their needs."

Others, however, are sceptical about FastGo's chances.

"It really depends on how much resources they can put in," said Singapore University of Social Sciences urban transport expert Park Byung Joon. "If they do not have much resources to attract more drivers, it will be just another small storm in a teacup."

FastGo aims to raise US$50 million in the coming months to fund its regional expansion. In comparison, Grab recently announced it had secured some $2 billion in funding.

Said Associate Professor Park: "Unless they (FastGo) can give more to drivers and commuters than Grab, it will be tough for them to compete."