Cause of hardware glitch still under probe; rogue train has been pulled out of service

Faulty signalling hardware on a train was responsible for the mysterious interference which led to multiple delays on the MRT Circle Line in late August and last week.

Engineers from the Defence Science and Technology Agency (DSTA) were instrumental in cracking the puzzle which left everyone else baffled - including train supplier, Alstom of France.

The Land Transport Authority (LTA) said yesterday that Passenger Vehicle 46 (PV46), among a batch of new China-made trains put into service only last year, has been pulled out of service. The cause of the hardware glitch, which made the rogue train emit "erroneous signals", is still being investigated.

These "erroneous signals" were picked up by trains travelling in the proximity of PV46, including on the opposite track. The interference caused the trains to lose their wireless contact with the track intermittently. As this meant the trains no longer "knew" where they were going, emergency brakes kicked in. In one incident last week, a train ended up stalled in a tunnel for about two hours. There were around 200 occurrences of the glitch from Aug 28 to Sept 2, and 100 from Nov 2 to Nov 6, when the trains, which are usually driverless, were manned.

For two hours on Nov 3 and the whole of the next day, commuters had no access to phone services as telco signals, which were initially suspected of causing the interference, were switched off as part of investigations. Tests showed that the telco signals were not the problem. 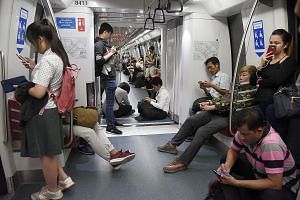 However, engineers and data scientists from DSTA and the Government Technology Agency of Singapore (GovTech), after studying train logs and incident reports, found that almost all of the faults occurred in the proximity of PV46.

Last Sunday, this was put to the test. Before PV46 was put into service, no interference was detected. But when the train was running again, "we found that PV46 indeed caused a loss of communication between nearby trains and the trackside signalling system", said the LTA, which had also roped in experts from DSO National Laboratories and electromagnetic interference specialist Rohde & Schwarz.

Transport Minister Khaw Boon Wan, in a Facebook post, said: "It was a wonderful Team Singapore effort, where every possible expert came together and put their hearts and minds to the assignment." He said the Circle Line episode had "caused us many sleepless nights".

The LTA said PV46, which is understood to be still under partial warranty, was "tested extensively" before it was put into service in July last year. It and SMRT are now working with Alstom to figure out what went wrong, and will conduct a "thorough" examination of the signalling hardware for the rest of the Circle Line fleet.

LTA chief executive Chew Men Leong said the sporadic occurrence of the incidents at different points along the Circle Line made it tough to pinpoint the cause. He thanked the DSTA and GovTech experts, "without whom we would not have been able to theorise the possibility of a faulty train, and identify PV46".

Professor Lim Teng Joon, a wireless communications expert at the National University of Singapore, wondered why SMRT spent so much time investigating the cellular network angle. "The fault... discovered by DSTA looks to me like something that should have been suspected early on." But SIM University senior lecturer Park Byung Joon said electromagnetic interference is one of the most common causes for communication disruption, and understood why LTA looked at it first.