SINGAPORE - Delays on the Downtown Line caused by a signalling fault would persist until the end of passenger service hours on Thursday (March 1).

In a joint statement issued on Thursday (March 1), operator SBS Transit and regulator the Land Transport Authority said Singapore's newest line was "affected by a signalling system fault at Bayfront station at 6.01am".

"As a result, trains approaching Bayfront station in both directions had to be driven manually and at a lower speed," it noted, adding that average speed had plunged from 70kmh to 18kmh.

By 7.30am, technicians had isolated the fault to a stretch from Promenade to Bayfront stations - a distance of one stop - in the direction of Expo.

The statement said there was still additional travel time of up to 15 minutes between the two stops over the affected stretch.

Because of the slowdown along this stretch, trains on the entire line are also bunching up, causing travelling speeds to drop across several stations. 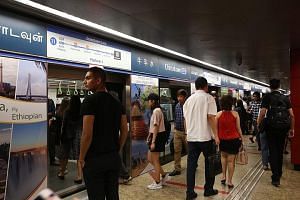 Downtown Line plagued by delays on Thursday due to signalling fault

The signalling system was supplied by German engineering giant Siemens.

During the morning rush hour, thousands of commuters were affected.

When The Straits Times was at Kaki Bukit station at about 8.30am, the trains were packed and commuters were unable to board.

Ms Melissa Ngo, 39,  an accounts manager, said: "I was heading to Bendemeer and I went down to the platform but I didn't think I would be able to get on the train, so I left. Usually, the trains here are very fast, I think this is the first time I've encountered something like this."

The 42km Downtown Line was launched in three stages, starting in December 2013 with six stations. The Downtown Line 2 was opened in December 2015, from Bukit Panjang, passing through the Bukit Timah corridor towards Rochor, before connecting to Bugis station. It spans 16.6km and has 12 stations.

Thursday's incident was the latest signalling glitch affecting the Downtown Line. On Dec 12, a signalling fault near Tampines station affected thousands of commuters during the evening peak hours.