Three hospitals in Singapore have banned patients, visitors and staff from charging personal mobility devices (PMDs) and motorised wheelchairs on their premises for fear of fires - except in certain closely monitored areas that are equipped with fire extinguishers.

"For safety and security reasons, charging of PMAs (personal mobility aids, like motorised wheelchairs) and PMDs within the hospital is allowed only at the dedicated outdoor area located at the Kent Ridge Wing Building. This area is monitored by CCTV and is equipped with fire extinguishers," said an NUH spokesman.

"All other unauthorised charging is strictly not allowed."

The restriction, which went into effect on July 1, was implemented because of fire safety, said the spokesman. The ban on charging also applies to staff who commute to work using PMDs. It means they can charge their PMDs only in the area at Kent Ridge Wing, which is near a taxi stand and drop-off point where a customer service officer is stationed most times.

At Ng Teng Fong General Hospital, charging of PMDs and PMAs is not allowed anywhere on hospital grounds except at two dedicated areas that are monitored by CCTV. Both areas are equipped with fire extinguishers.

"We are aware of the fire hazards posed by the charging of PMDs/ PMAs, and hence charging of such devices within the campus is not allowed," said a hospital spokesman. 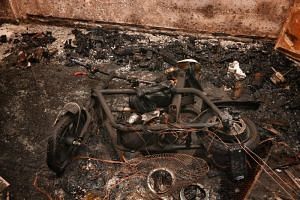 At Alexandra Hospital, where the use and charging of PMDs are not allowed, staff are now in the process of selecting an open area away from the main hospital building for the charging of PMAs by patients and visitors who need assistance to move around hospital grounds.

"Our key considerations are safety, power outage and other hazards," said a hospital spokesman.

The moves taken by the three hospitals coincide with the rising number of fires involving PMDs. Last year, there were 74 such fires, a 51 per cent increase from the 49 in 2017, Singapore Civil Defence Force (SCDF) figures show. These fires typically occur during charging of the devices' batteries or shortly after.

A 40-year-old man died after he was rescued from his burning Bukit Batok Housing Board flat last Thursday. The SCDF said preliminary investigations indicated that the fire was accidental and linked to three burnt PMDs in the unit. The man, who had third-degree burns over 40 per cent of his body, died at the Singapore General Hospital on Saturday afternoon.

Hospitals handle flammable materials, such as gases and radioactive equipment, and contain facilities such as laboratories and kitchens. As hospitals would have many inpatients, some of them infirm, situations like a fire can be dire. A fire may also cut off power supply and disrupt surgery.

It is not immediately clear if other establishments are taking the same precautions.

Real estate services company JLL, which manages total space of over 30 million sq ft with more than 20 commercial assets within the Central Business District, said most of its clients did not ban tenants from using or charging PMDs.

"To support sustainable mobility, most of our commercial asset clients do not ban tenants from using PMDs. Tenants who charge their PMDs are generally expected to take measures to ensure safe use of all electrical appliances within their tenanted space," said Mr Derek Soh, head of property and asset management, Singapore and South-east Asia, at JLL.

JLL would highlight workplace risks from time to time to maintain a safe environment, Mr Soh said. "In the unlikely event of fire occurring, the appropriate emergency response procedures would be activated on top of the fire protection system within the asset."