It is first above-ground station with ticketing concourse above platform

Commuters at the new Tuas Link MRT station will have a bird's eye view of the platform below, and look out onto a space reminiscent of grand central stations.

Tuas Link is one of four stations on the new 7.5km Tuas West Extension that will open on June 18, extending the East-West Line to the western tip of the island.

It is the first elevated station with a ticketing concourse level built above the platform.

At other above-ground stations, the concourses are below the train platforms.

The concourse at the Tuas Link station is about 16m above the ground, while the platform is about 10m above ground level.

"The platform is a nice space to walk through, like those grand central stations that you see overseas," said Mr Hamdi Rizal, a senior principal architect with the Land Transport Authority (LTA). 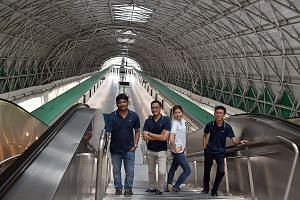 "It's airy and bright. It has a different feel from some other stations in Singapore. It's more grand."

At about 2,300 sq m, the concourse is the smallest among elevated MRT stations.

Commuters can enjoy the sense of space when walking on the platform, said Mr Hamdi.

The station's unique design has practical considerations. LTA senior project engineer Foo Feng Ling said the tracks at Tuas Link - at about 9m above ground - could not be built higher as they also carry trains to Tuas Depot, which is at ground level.

"This facilitates the safe descent of the tracks to an appropriate height before the trains enter Tuas Depot," said Ms Foo. From Tuas Link, trains will travel about 300m before reaching the depot.

Mr Hamdi said it was not possible to locate the concourse at ground level, below the platform.

This is because the station footprint - at about 7,500 sq m - is bounded by the Raffles Marinaand the road reserve, which is land that the LTA safeguards to construct new roads or improve existing ones.

"It's a linear plot of land that we could not exceed the boundary of," he said, adding that service rooms and ancillary areas for the station are also located at ground level.

Because of the short concourse, the escalators and lift to ferry commuters to and from the platform are tucked away at one end.

This means commuters who disembark from the train at the farthest end of the platform have to walk about three-quarters the length of the platform before they reach the first set of escalators.

"A major function of this station is to accommodate passenger flow from the Tuas Checkpoint... The current design seems to underestimate the future needs," he said.

Mr Hamdi said pedestrian simulation analyses are done by the LTA and its consultants at MRT stations to "assess if there are potential bottlenecks in commuter circulation routes prior to taking the escalators, lifts, and moving through corridors".

"Tuas Link station's current provision for the lift and escalators has similarly undergone such an assessment at the design stage," he said.

About 100,000 commuters are expected to use the Tuas West Extension daily. The new $3.5 billion line also includes a 4.8km road viaduct running under a section of the rail line.