SINGAPORE - Construction of the 21.5km North-South Corridor, which will connect towns in the northern region to the city, will start next year, instead of later this year as planned.

The Straits Times understands that more time was required to finalise the plans for the corridor, which was originally intended to be a vehicular expressway but later reconfigured to include dedicated bus lanes and cycling trunk routes.

While works will start slightly later than what was previously announced, the Land Transport Authority (LTA) said it will maintain its targeted completion date of 2026.

The LTA said it has called a tender for the first civil contract, which involves the design and construction of about 1km of vehicular tunnels between Suffolk Walk and Novena Rise.

This first civil contract will also entail the building of surface-level commuter facilities such as cycling paths, bus stops and covered linkways, an LTA spokesman said. 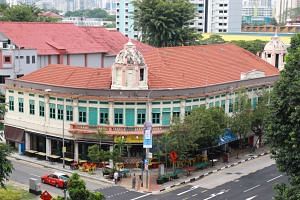 The winning contractor will also be responsible for designing and reconstructing two pedestrian underpasses in Novena.

Integrated North-South Corridor to be ready in 2026

One of the underpasses connects the Velocity@Novena Square shopping mall and Revenue House, and the other, Novena MRT station and Goldhill Centre.

"Tenders for the rest of the civil contracts will be called progressively in the coming months, with works expected to commence in 2018," the spokesman said.

With the completed North-South Corridor, bus passengers travelling from towns in the north - such as Woodlands, Sembawang and Ang Mo Kio - could have journeys to the city shortened by up to 30 minutes.