The company is part of the McLaren Group, which includes the F1 team and high-performance carmaker McLaren Automotive.

SMRT and McLaren engineers are aiming to adapt race car condition-monitoring technology to assess the performance of MRT trains.

Such technology, used on F1 cars, provides information from highly specified data captured in real time. This allows the team to optimise on-track performance in races.

Over a Grand Prix season with around 20 races, the McLaren race team captures an average of more than 12 billion real-time data points from over 300 sensors embedded in its two race cars.

The goal is to customise the technology to monitor train motors, brakes, pneumatic systems and gearboxes on a test-bed train, set to be ready later this year.

SMRT and McLaren Applied Technologies signed a memorandum of understanding to do this on Feb 23. 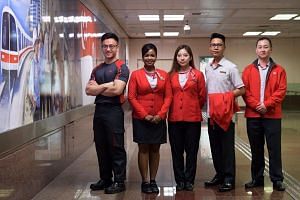 "We look forward to collaborating with McLaren Applied Technologies to elevate this capability further, combining our engineering expertise in rail with their proven capabilities harnessing sensors, telemetry and software in motorsport."

SMRT has been adapting various measures from overseas to improve the train system here. Earlier this year, it introduced the Japanese concept of kaizen, or continuous improvement, to its work processes.

Three of six major renewal programmes for the North-South (NSL) and East-West (EWL) MRT lines will be completed by mid-year, with the remaining three to be completed by the early 2020s.

Programmes to replace rail sleepers and the power-supplying third rail have been completed. A programme to replace the signalling system on the NSL has wrapped up, while that for the EWL will be done by June.

Three other upgrading programmes will also be rolled out soon - upgrading the power-supply system to cope with the higher train load; replacing track circuit system (a system related to the signalling system); and the replacement of 66 first-generation trains.

The Land Transport Authority and SMRT said that commuters should expect shorter operating hours beyond June to carry out upgrading work.

Maintenance and track improvement works are also being done and have resulted in slower trains and shorter operating hours.

Some trains have been running slower on the North-South Line as works are carried out near Raffles Place MRT station to replace parts of the concrete track bed that support the running rails.

All 35 stations on the East-West Line will face shortened MRT operating hours during the weekends this month for engineering works and testing of a new signalling system.