SINGAPORE - Most Singaporeans want the existing 15kmh speed limit for personal mobility devices on footpaths to be lowered, and cyclists to wear helmets on the road, according to survey results released on Friday (Aug 24).

The online survey, which was conducted in April and drew more than 6,000 responses, was part of public consultations for a report by the Active Mobility Advisory Panel.

It showed that 77 per cent of respondents wanted the existing speed limit of 15kmh on footpaths to be lowered, with 35 per cent saying it should be at 8kmh and 19 per cent preferring it to be 10kmh.

Most of those surveyed said helmets should be mandatory for cyclists riding on roads, with 77 per cent in support of it.

Among the recommendations are to lower the speed limit for bicycles and PMDs, including e-scooters, on footpaths to 10kmh as well as to ensure cyclists use helmets on roads.

Another suggestion is to make it mandatory for riders to stop and look out for traffic.

In the survey, 39 per cent felt riders should dismount and push their PMDs or bicycles at road crossings, while 60 per cent said riders should either stop or slow down before looking out.

Respondents came from many demographic groups and included pedestrians, cyclists and PMD users, said the report. 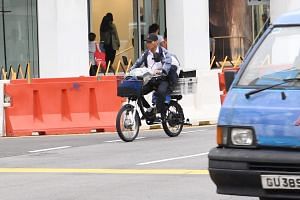 Panel calls for PMD speed limit to be cut to 10kmh, mandatory helmet use for cyclists on roads

LTA could outsource enforcement against bicycles and personal mobility devices

Under the travel diary activity, close to 100 regular cyclists and PMD users were tasked with riding their devices under various specified speed limits. They were also told to practise certain behaviours at road crossings, such as dismounting and pushing their PMDs, or stopping and looking out for traffic, before recording their experiences and challenges.

It was found that most preferred travelling at high speeds and found it acceptable to travel under 10kmh and 12kmh in crowded areas.

But the report added: "Some participants shared that if the speed limit was lowered from the current 15kmh, it may discourage the use of active mobility devices for commuting."

The report noted that participants generally felt stopping and looking out before riding across crossings was more acceptable than dismounting.

"They cautioned that dismounting repeatedly could be challenging especially for the elderly, or for those with a load or a pillion rider," said the report. "Some also shared that if there were no cars approaching the crossing, it may not make sense to stop."

There were also three focus group discussions conducted in May involving a mix of pedestrians, cyclists, PMD users and motorists.

The panel was formed in 2015 and first drew up rules on the safe use of paths by cyclists and PMD users two years ago. It is led by Associate Professor Muhammad Faishal Ibrahim, who is Senior Parliamentary Secretary for Education, and Social and Family Development.

The Ministry of Transport said on Friday that it would study the panel's recommendations and issue its response in due course.