SINGAPORE -  The disruption of train service on the Downtown Line extended into Thursday afternoon (March 1), more than five hours after rail operator SBS Transit warned of delays due to a signalling fault on the 42km-long MRT line.

When The Straits Times visited the Bayfront station at around noon, trains were observed to be moving slower than usual.

Trains on both bounds, towards Expo and Bukit Panjang, stopped for about three minutes at the station.

A trip between the Bayfront and Downtown stations - normally a journey of about one minute - took about four minutes. Staff could also be seen at the controls of the normally driverless trains.

At both stations, announcements over the public address system informed commuters of the delay and reassured them that recovery was under way.

Hundreds of commuters were first affected during the morning rush hour, with SBS Transit tweeting at about 7am that they should add additional travel time of up to 15 minutes to their journey.

"Recovery works in progress. We are sorry," SBS Transit said.

In a tweet at about 7.40am, it said that free passing bus services were available between Bugis and Chinatown stations in both directions.

A 50-year-old assistant manager, who wanted to be known only as Michael, told The Straits Times that he arrived at Bukit Panjang MRT station at 6.55am and was shocked to see a large crowd at the entrance.

"I live in Bukit Panjang and I was heading to my workplace in Chinatown. But I decided to make a detour and take a bus instead, as I did not want to be late for work," he said, adding that his usual journey on the MRT line would take him about 35 minutes.

Michael, who works in the hospitality sector, added that commuters were still streaming into the station,although two MRT staff were seen near the gantry advising them on alternative routes. He added that it took him about 10 to 20 minutes more to get to work by bus.

When The Straits Times was at Kaki Bukit station at about 8.30am, the trains were packed and commuters were unable to board.

Ms Melissa Ngo, a 39-year-old accounts manager, said: "I was heading to Bendemeer and I went down to the platform but I didn't think I would be able to get on the train, so I left. Usually, the trains here are very fast, I think this is the first time I've encountered something like this."

Another user, NKzrh, said: "Train fault again at Bayfront downtown line.. as of 6.57am I'm now at Bukit Panjang station."

The train delays on Thursday morning were compounded when ride-hailing app Grab suffered a brief outage, with many users reporting that they were unable to book a ride.

In an update at about 11am, Grab said that services were fully restored. 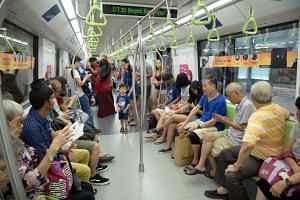 The Downtown Line 2 was opened in December 2015, from Bukit Panjang, passing through the Bukit Timah corridor towards Rochor, before connecting to Bugis station. It spans 16.6km and has 12 stations.

Last month, the Land Transport Authority said that trips on the Downtown Line have increased by more than 50 per cent since the opening of the DTL3. More than half a million rides daily are expected on the MRT line by the end of this year, it added.

The Straits Times has contacted SBS Transit for more information.