Singapore Airlines (SIA) officially opened its digital innovation lab KrisLab yesterday, assuring its customers that the push for innovation and smart solutions will not be at their expense.

Speaking at the SIA Group Sports Club near Changi Airport, the airline's chief executive Goh Choon Phong said: "Digital must be an enabler of the SIA experience, rather than a substitute for what we are best known for - service excellence.

"We are fully embracing digitalisation and technology in our business operations in ways that will enhance the pleasure of travel for our customers.

"We aim to enrich every aspect of the way that our customers experience SIA - from pre-flight, in-flight to post-flight."

With KrisLab - which was officially opened by Trade and Industry Minister Chan Chun Sing - staff have a workspace to develop innovative ideas and co-innovate with external partners, start-ups, established incubators and accelerators.

The initiative is part of SIA's Digital Innovation Blueprint, which was launched a year ago.

Using data analytics, Internet of Things, as well as virtual and augmented reality, a key aim of the digital push is to improve service standards, for example, by offering customers a more personalised level of service based on their travel patterns and habits, as well as likes and dislikes. We are fully embracing digitalisation and technology in our business operations in ways that will enhance the pleasure of travel for our customers. We aim to enrich every aspect of the way that our customers experience SIA - from pre-flight, in-flight to post-flight.

The airline also hopes to develop smart solutions to boost the efficiency of aircraft maintenance processes.

This will help lower maintenance costs and decrease aircraft delays, which will benefit travellers.

At the lab, staff can use and explore technologies such as blockchain, mixed reality devices, artificial intelligence and data analytics, among others, to develop their digital initiatives.

Once an idea has been approved, it will receive seed funding.

The digital innovation lab team will then provide expertise to help develop the idea into a prototype before it moves to the implementation stage.

One of the innovations now being explored at KrisLab involves the use of virtual reality technology to allow designers to step on board a plane and explore or change future cabin design concepts quickly.

KrisLab has already received more than 180 ideas from SIA employees, out of which 50 have been developed into prototypes. 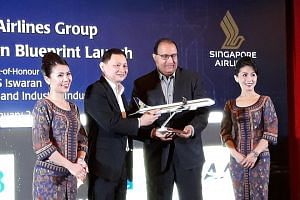 Of these, about a dozen or so are at the proof-of-concept stage, said Mr Goh. The lab is aimed at nurturing a culture of innovation among SIA staff, he added.

For example, currently in the works is a service that will allow customers to receive notifications regarding events and deals on their phones while overseas - even if it is not connected to a mobile network.

It was proposed by SIA procurement associate Stella Zuo, 30.

The KrisLab team has hosted four rounds of the SIA AppChallenge, where teams from all over the world were invited to compete in an innovation challenge to develop applications that could prove beneficial to SIA and its operations.

The last round attracted more than 1,500 participants from more than 70 countries.