SINGAPORE - Booking an economy seat on a Singapore Airlines (SIA) flight may become more difficult in the future, as the premium carrier takes a back seat so that its budget arm, Scoot, can climb higher.

In just five years, Scoot, which operates medium- and long-haul flights, has not only overtaken the group's regional arm, SilkAir, but is also about a third as big as SIA in the economy market.

This is based on the number of seats offered, as compiled by industry consultancy OAG.

This year, Scoot will offer close to 7.5 million seats - more than three times what it did in 2014 - while SilkAir will grow by about 25 per cent to just over 6 million seats.

SIA will see its inventory shrink by about 3 per cent, compared with 2014, to 21.3 million seats this year.

Adjusting capacity is part of SIA's overall strategy to deal with intensifying competition on all fronts.

Scoot, with its much lower cost base, for example, is better suited than SIA to take on rivals in the economy and low-cost market.

This does not mean, however, that the premium carrier is not competing in the economy segment, SIA chief executive officer Goh Choon Phong has said repeatedly.

When the airline unveiled new seats and other in-flight products for its Airbus 380s earlier this month, it also revealed that the superjumbos will be retrofitted to add more seats in the premium economy and economy cabins.

The focus, though, is clearly on the premium sector, and in particular, business class, market observers say. 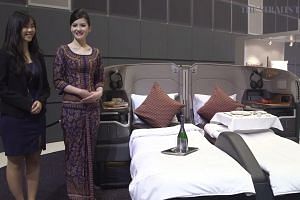 While SIA has been cutting back on economy seats since 2014, it has been increasing the number of its business class seats by about 5.8 per cent.

The revamped A-380s will also feature a first for SIA: a full-length divider between centre business class seats which can be converted into seats for couples.

Ultimately, airlines make capacity decisions based on market conditions and the segments they want to pursue, said analysts like Mr Mayur Patel, OAG's regional sales director for Japan and the Asia-Pacific.

For example, SIA and many other long-haul carriers are expanding their premium economy cabins to attract customers who do not want to pay for business class but are prepared to pay for a better experience than in economy class.