At the seventh Joint Forum on Infrastructure Maintenance on Friday (Nov 2), Mr Khaw disclosed that the overall system had clocked 660,000 train-km between delays in the first three quarters of the year.

However, it would not be sustainable to keep raising standards, said Mr Khaw, as there could be an adverse impact on factors such as safety and cost. He said that once the system is up to an acceptable level of reliability, the challenge would be to maintain it at that level.

"We have turned the corner, but our job is not yet done," he added, noting that three major asset renewal programmes - to replace the power system, track circuits and first-generation trains - are yet to be completed. 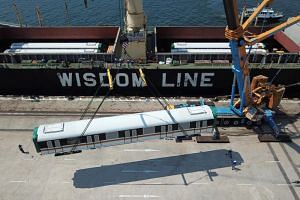 He said Mr Kua was among the first people he consulted when he joined the Transport Ministry three years ago. He recalled that Mr Kua - even though he was accountable to shareholders - was clear about his objective of providing an essential service to Singaporeans.

"That must be the first priority," he recalled Mr Kua saying. "Making money is incidental."

Mr Khaw said Mr Kua had contributed much to public transport, and that his legacy will continue.