SINGAPORE - Five stations along the North East Line (NEL) will close earlier on Fridays and Saturdays in July to facilitate maintenance and renewal works.

Rail operator SBS Transit (SBST) said on Friday (June 21) that the stations from Punggol to Kovan will close earlier at around 11pm on the affected days. It said: "Maintenance works on parts of the power system and the platform screen doors, as well as track replacements will be undertaken."

Commuters travelling between Serangoon and Punggol stations can opt to switch to a dedicated shuttle bus service, Shuttle 21, which will arrive every one to five minutes and stop at designated bus stops or interchanges near affected stations.

The fares for Shuttle 21 will follow the same fare structure as the trains.

Train services for the rest of the NEL - between Serangoon and HarbourFront stations - will continue to operate, but at longer intervals of about nine minutes during days of early closures.

The operating hours of service 325 will also be extended, with its last bus departing Hougang Central Bus Interchange at 12.50am.

SBST said commuters should plan ahead by checking the timings at affected MRT stations, as last train timings vary for each station. The timings will also be available on SBST's website and social media platforms. 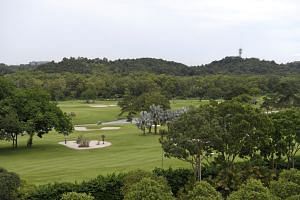 The operator will put up publicity posters and make announcements at MRT stations to inform commuters of the maintenance works. Ground staff will also be deployed on affected dates to inform and guide commuters.

The maintenance works are part of a major renewal project on the NEL to upgrade its trains, track components, and power and signalling systems.

Senior Minister of State for Transport Janil Puthucheary said in March that early closures on Fridays and Saturdays had allowed maintenance to be stepped up for the NEL.