Building a world-class public transport system here requires a strategic investment in manpower, and the transport system can draw lessons from the healthcare sector in this area, Minister for Transport Khaw Boon Wan said yesterday.

To support industry transformation, a clear, multi-year strategy of consistent investment in capabilities and skills development is needed, he added.

"To succeed in industry transformation, it is my strong belief that we need to forge a strong 'One Team' spirit between Government, regulator and private operators," Mr Khaw said in a speech at the Land Transport Excellence Awards at the Singapore Expo in Changi.

"This 'One Team' spirit, I think, has been the key factor behind the successful improvement in rail reliability in recent years. (It) will remain important going forward."

Citing the country's achievements in healthcare - most recently with Singapore General Hospital ranked the world's third best hospital by Newsweek magazine - Mr Khaw said that the public transport system can try to emulate it.

One key strategy was the Health Manpower Development Programme, which Mr Khaw, who was the health minister from 2004 to 2011, was involved in.

Healthcare staff learnt the latest subspeciality skills and capabilities from "the best medical centres in the world", and as local consultants pioneered new techniques, foreign doctors and nurses came to pick up the latest skills. Consistent investment in medical research and translational medicine also led to the development and patenting of new medical devices and innovative solutions, he said. 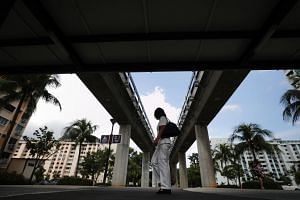 Priority MRT cabins and more sheltered walkways in the pipeline

Getting the best value from the transport system

Peak-hour journeys should take no more than 45 minutes by 2040, under Land Transport Master Plan

The result is that Singapore's public hospitals are now at the cutting edge of medicine, with subsidised patients having access to the best specialists and subspecialists.

The MKBF is an internationally accepted benchmark for rail reliability performance and measures the mean distance travelled before a train fault that lasts more than five minutes.

Congratulating the winners, Mr Khaw said when he set a stretch target for the industry a few years ago, he asked for MKBF data of the world's major MRT operators, and decided on a one million train-km.

"We always take the approach - underpromise so that you can overperform. It makes a lot of political sense," he said. "But when our MRT was in pretty poor shape, I decided you needed something bold, ambitious, seemingly impossible, so that even if you can't achieve it, if you can achieve 90, 80, 70 per cent of it, it would have been a big achievement. And importantly, we will be able to motivate our staff."

"I didn't quite believe that we will make it - but we made it."

He was also pleased with the North-South Line, the oldest, saying: "Being old like my old bones, if you don't fix it properly, every morning it will give you trouble."

Mr Khaw, who had surgery after fracturing his left arm in a fall last month, said that while in hospital, he kept himself updated on glitches on the Circle Line and East-West Line, and was relieved at the prompt recovery action.

"The glitches remind us that we are not yet perfect, and that we have to work harder and smarter," he said. "But our MRT system today is far more reliable than it was in 2017. We have turned the corner."