SINGAPORE - Projects to promote a caring commuter culture will soon be done on a much larger scale nationwide, if a proposal to come up with a wide-ranging committee goes through.

The Public Transport Council (PTC) has called for the creation of a new committee involving representatives such as those from the public and private sector as well as voluntary welfare organisations to grow Singapore's public transport system into a more caring, welcoming and inclusive one.

The council had started the Caring SG Commuters movement in 2017 to promote the growth of a caring commuting culture. While it has partnered with other organisations on specific projects such as with Khoo Teck Puat Hospital, such projects are generally done on a localised basis.

In a report on the movement published on Thursday (July 4), the PTC said while its work has made a difference on various fronts, it is just a small step forward and more can be done at an integrated level.

PTC chairman Richard Magnus said: "It is imperative that the seed that has been planted continues to receive the support needed to ensure sustainability of the Caring SG Commuters movement. To this end, we recommend setting up a Coordinating Committee to facilitate and pull together inter-agency efforts to foster the movement within our transport network."

Mr Magnus said the proposed committee will help Singapore make a more decisive push towards one of its goals in the Land Transport Master Plan 2040, which is to have a land transport system that is more inclusive and supported by a gracious and caring commuting culture. 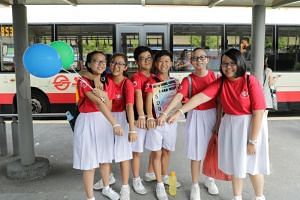 More help at MRT station for elderly, people with disabilities

Say hi to your fellow passenger on your next bus ride

Achieving the goal will need the creation of a sense of shared responsibility among all stakeholders and also a culture change, he added.

The PTC said the committee could include public agencies, companies and voluntary welfare organisations, among others. It would lead this committee, which would oversee the conceptualisation, implementation and publicity of initiatives across various agencies to support the Caring SG Commuters movement.

Previous PTC initiatives to promote kindness include the creation of Heart Zones that facilitate helping and request for help between commuters, and Heartwheels @ Linkway which provides wheelchairs for those who need it.

In another announcement, the PTC said it has worked with the Singapore Kindness Movement to jointly launch a Caring Commuter award category for this year's National Kindness Award - Transport Gold event, to be held in October. The award will recognise commuters' acts of care, such as helping those in need.

The council has submitted its report, which also details the work done in promoting a caring commuter culture in the last two years, to Mr Khaw Boon Wan, the Coordinating Minister for Infrastructure and Minister for Transport.

In a Facebook post on Thursday, Mr Khaw said the report comprised "several good recommendations", and urged commuters to do their part in helping to build a gracious commuting culture.

IT program executive Chong Kwek Bin, 38, who is visually impaired, said he hoped that beneficiaries such as the visually impaired would have the opportunities to share their inputs in this committee if it is formed.

He noted that the commuting culture here has been improving with more members of the public spontaneously stepping forward to help on public transport without being asked.

Mr Chong added: "Having said that, there are still some areas where awareness can be improved, such as how to offer assistance to the visually impaired."