Plans to expand the cycling network threefold may be brought forward by a few years from an original 2030 target, in a move that could also give electric scooter users more room to ride.

Senior Minister of State for Transport Lam Pin Min said yesterday that the new aim is to expand the network from 440km to about 1,300km earlier than targeted. This will not just promote active mobility, but also give more riding space to users whose e-scooters have been banned from footpaths.

"We are currently looking at the timeline. Hopefully, we will be able to bring it forward by a couple of years," said Dr Lam, who added that the Government will look at the possibility of reclaiming roads to create space for cycling paths.

Riders of e-scooters were banned from the 5,500km of footpaths on Nov 5 and told to stick to cycling paths.

Dr Lam, who viewed active mobility infrastructure in Ang Mo Kio, also said the authorities are looking at how to speed up the conversion of footpaths to shared paths.

On expediting the plans, Dr Lam said: "We are doing this because, with the announcement of the ban of e-scooters on footpaths, the connectivity for active mobility users has been affected.

"I think (the footpath ban) is a necessary step to bring back safety to footpaths, but at the same time we are also working at increasing the connectivity and improving the active mo-bility infrastructure." 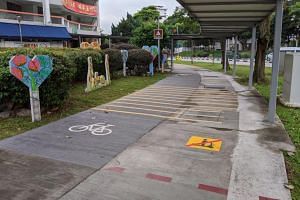 Markings being drawn on footpaths to remind e-scooter users of footpath ban: LTA

E-scooter, e-bike riders must take theory test; pedestrians will be encouraged to keep left on footpaths

Will footpath ban spell the end of e-scooters in Singapore?

Is Singapore serious about going car-lite?

He said that moving forward, e-scooters will gradually grow to become an established mode of transport for recreation and as a first-and last-mile option to public transport nodes, but that they are not likely to ever be as popular as they were before the footpath ban.

From Jan 1, those caught riding e-scooters on footpaths can be fined up to $2,000, jailed for up to three months, or both.

The Land Transport Authority said earlier this month that it had issued 3,444 warnings to riders since the ban started.

There has been a "palpable difference" in terms of safety on footpaths since the e-scooter footpath ban kicked in, with pedestrians now likely to feel much safer, said Dr Lam.

Ang Mo Kio was designated as a walking and cycling town in 2014, with features implemented to let pedestrians and active mobility users use paths safely.

There will be 20km of cycling paths in Ang Mo Kio by 2022, which would make the network one of the longest in residential towns in Singapore. This has been facilitated through wider zebra crossings, bicycle crossings and a new digital display counter that shows the number of pedestrians and cyclists on the paths along Ang Mo Kio Avenue 3.

"Hopefully we will be able to build more conducive cycling paths and active mobility infrastructure for Singaporeans in every town in Singapore."

A version of this article appeared in the print edition of The Straits Times on December 18, 2019, with the headline 'Plans to expand cycling network could be sped up'. Subscribe
Topics:
More
Whatsapp Linkedin FB Messenger Telegram Reddit WeChat Pinterest Print Purchase Article Copy permalink