A panel of electrical experts has put forward no fewer than 40 recommendations to make Singa- pore's rail network more resilient.

Roped in four months ago, the panel of 13 experts - four of them from overseas - said these recommendations should be carried out as soon as possible to minimise power-related glitches - a major cause of rail breakdowns here.

The urgent recommendations include more frequent inspections of assets and replacement of components, the Land Transport Authority (LTA) said yesterday. The panel also called for new monitoring technologies, and tighter control of manufacturers and contractors at the design and building stages.

For instance, the panel said that the third rail of the North-South and East-West lines should be inspected every six months until it is replaced. It said components which are critical to operations should be considered for replacement within five years of reaching the end of their lifespan.

The panel also recommended certain components such as switches and circuit breakers be replaced with more reliable models.

It suggested that exercises be conducted to test operational response measures, in case there is a repeat of previous power-related incidents - like the one on July 7 last year that paralysed the entire North-South and East-West lines. 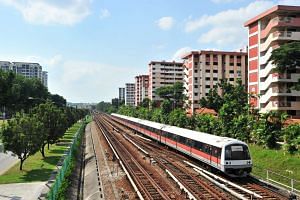 For future MRT lines, the panel said, measures must be in place "to ensure tighter specification and quality control on the contractors and manufacturers". It cited the Circle Line's power cables, which failed within the first several months of operation.

The panel recommended the use of new technologies, such as an intelligent fault identification system to pinpoint exact fault location.

It also called for "extensive usage of energy storage to ride through voltage dips".

It added that online real-time thermal imaging equipment should be installed in substations to detect heat build-up in key components.

In recent months, circuit breakers had caught fire at an MRT station and the Bukit Panjang LRT.

The LTA said it would adopt all the urgent recommendations, adding that some were already in place in newer lines.

For instance, the Downtown and Thomson-East Coast lines were designed with intelligent fault identification systems as well as devices which isolate power trips so that they do not affect an entire line.

Other recommendations, such as more frequent inspections of key components and timely asset replacements, were among those listed by the 2012 Committee of Inquiry.

For the longer term, the panel called for a power system design that will have a downtime of not more than five minutes, and where full recovery can be obtained within 20 minutes.