Bike-sharing firm to ban such cyclists, while those who park responsibly will be rewarded

Bicycle-sharing firms are upping the ante in their fight against irresponsible parking of their bicycles - with persistent errant users possibly banned from renting a two-wheeler.

Yesterday, oBike announced plans of how it was going to use technology to further encourage responsible parking while at the same time slapping recalcitrant users with penalties - something other firms are also exploring.

In a media release, oBike said it will be using geofencing, which creates a virtual boundary that can send out an alert when a bicycle enters or leaves an area, to help put its plan in place.

To help users get used to the new initiatives, the firm will, for a six-month period, merely send notifications - indicated by a letter P on its mobile app - if a bicycle has not been parked within one of the 1,100 bicycle parking zones islandwide

After this period, users will have points deducted from their accounts if they do not park within these areas, and will not be allowed to use the oBike service when their points are depleted.

Those who wish to have their accounts reinstated will have to appeal to oBike, which will decide on a case-by-case basis whether to restore the accounts.

Those who park within designated areas, on the other hand, will have points credited to their accounts, which can be exchanged for rewards such as shopping vouchers, said the Singapore-based firm.

After (a six-month) period, users will have points deducted from their accounts if they do not park within (one of 1,100 bicycle parking) areas, and will not be allowed to use the oBike service when their points are depleted.

The move is in line with guidelines set out in an agreement announced earlier this month - between the Land Transport Authority (LTA), the five bike-sharing operators here, the National Parks Board and all 16 town councils - which require all five operators to implement geofencing to curb indiscriminate parking.

The commitment to clamp down on irresponsible parking arose from concerns from both the public and the bike-share firms over bicycles being parked willy-nilly, on random grass patches and walkways, while some were even found in drains.

The Straits Times tried parking an oBike yesterday in Punggol Place about 200m outside the nearest bicycle parking zone at the Punggol MRT station, but did not receive a notification on the app.

oBike clarified that users currently receive warnings only if they park in "red areas" marked out on the app, which represent restricted areas such as army camps and Changi Airport.

oBike, which started operations in January and has since expanded to countries such as Malaysia and Australia, added that it was working closely with LTA to introduce beacons - hardware which can enhance the accuracy of geofencing - by the second quarter of next year.

Other firms are also ramping up the use of geofencing, including Baicycle, which plans to debut here by the end of the year.

GBikes said it has already implemented geofencing, while SG Bike - launched in August with about 300 bicycles in the Holland-Bukit Panjang area - requires its users to park around a "geostation", which emits a radio-frequency identification field that recognises the firm's bikes, or risk a fine. 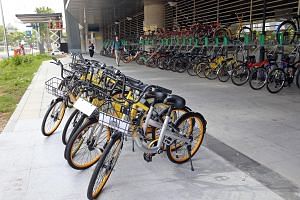 Bike-sharing firms to use tech to tackle parking issues

In response to queries, ofo said its own geofencing technology will be "fully functional" by the end of this month.

Mobike country manager Sharon Meng said the firm is currently conducting trials of beacons to improve geofencing accuracy to within a metre.

One shared-bike user, Ms Chew Lihong, welcomed the use of geofencing. "It will help users who want to do the right thing but might not know where to park," said the 26-year-old civil servant, who uses shared bikes about twice weekly.

She said bike-sharing should be regulated to curb misuse while still allowing the public to benefit.