Commuters on the Circle Line could not use their mobile devices at four stations yesterday evening, as investigations into an unknown communications interference in the tunnels intensified.

In an announcement made just 20 minutes before mobile signals were switched off at 7pm yesterday, operator SMRT and regulator Land Transport Authority (LTA) said the move was "to eliminate telecommunication signals as a possible cause" of a train signalling glitch that has persisted for five days now.

SMRT followed up with a tweet about the shutdown at Kent Ridge, Haw Par Villa, Pasir Panjang and Labrador Park stations which went out at 6.46pm. The mobile signal blackout lasted two hours, during which commuters could not make phone calls, send or receive text messages, or access the Internet.

Commuter Hawyee Auyong, 35, said: "How can mobile phone signals interfere with train systems when these frequency bands are licensed by IDA (the Infocomm Development Authority)?" 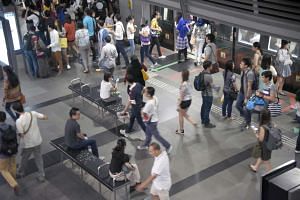 askST: How does the Circle Line train signalling system work? 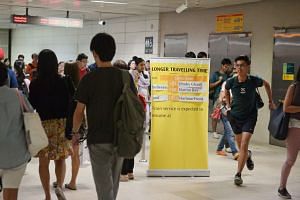 "It's unlikely that there would be interference, but I can understand their caution in trying to rule out any possibility," he added.

Sales executive Jason Tamaki, 35, said the shutdown was a minor inconvenience. However, data analyst Rachel Wang, 24, who took the train from one-north to HarbourFront, said: "I might be receiving urgent calls or texts so I'm a bit worried about that."

The LTA and SMRT said most of the interference occurred during peak hours. When this happens, the trains' signalling system loses contact with the track, which causes the driverless trains to apply emergency braking.

SMRT has since manned the trains. The staff onboard reset the signalling system when it loses contact, and drive the train manually for short stretches when necessary.

The glitch has caused journeys to become longer and more uncomfortable. Commuters have taken to social media to voice their unhappiness. Since Monday, thousands of tweets pertaining to the Circle Line and SMRT have been posted. The number of tweets peaked on Tuesday (a day after the glitch was made known) but they have since dwindled - a sign that commuters may have resigned themselves to the degraded service.

A version of this article appeared in the print edition of The Straits Times on September 03, 2016, with the headline 'No phone calls on Circle Line for 2 hours'. Subscribe
Topics:
More
Whatsapp Linkedin FB Messenger Telegram Reddit WeChat Pinterest Print Purchase Article Copy permalink