Transport Minister says better manpower allocation, use of technology the way to go

But this should not translate into shutting down the system during operating hours to get the work done, he said in an interview with The Straits Times.

"For an ageing system, we really need to step up our maintenance," he said, pointing out that the effort needed to maintain a 10- to 15-year-old system is "very different" from that for a 25- to 30-year-old system. Singapore's first MRT line opened in 1987, 28 years ago.

The issue of congested and delayed trains in the run-up to the 2011 General Election made transport a hot-button issue then.

A slew of improvements have boosted services and reliability, but recent breakdowns have pushed transport back into the limelight as Singapore heads for its next election in the weeks ahead. 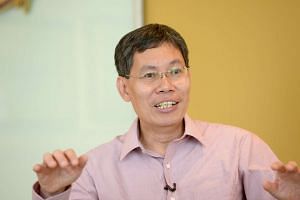 'Like obituaries, eulogies without the flowers': Lui Tuck Yew on comments in support of him

Asked if increased maintenance would mean more halts to services during operating hours, as operators have complained they have only a small window every night to complete maintenance, Mr Lui said: "I don't necessarily agree that they must have more prolonged shutdowns of the system in order to be able to do what must be done."

The way to intensify the maintenance is through a proper allocation of manpower resources and better use of technology, he said.

Pointing to Hong Kong's MTR system, to which the Singapore system is often compared, Mr Lui said it is run as intensively as Singapore's and yet, during their graveyard shift, there is a "massive mobilisation" effort. "We are not yet at that level," he said.

Calling for a change in the maintenance roster of Singapore's public transport operators, Mr Lui said more could be done to better deploy manpower in the graveyard shift.

Technology should also be used more, particularly to monitor the system's condition. It would make maintenance tasks more achievable and manageable, he said.

Asked if the MRT's reliability problems were due to maintenance or design and infrastructure problems, Mr Lui said he did not want to apportion blame to either.

But he noted design problems tend to crop up within three to five years of the opening of a line.

"To say that design issues come up after 20, 25 years, well, I would say that if people have progressed to a better and improved design, then they ought to have kept up," he said.

Mr Lui said he did not believe major breakdowns like those of July 7 affecting two key lines cannot be prevented with enhanced maintenance. But, he added: "Setbacks are an opportunity for us to really put in even more effort and hopefully do better over time."

He noted that while reliability has had a mixed report card, much has been done to solve the two other pet peeves of commuters: capacity and congestion.

In the last four years, train capacity has gone up by almost 30 per cent and headways - the time between trains arriving - is now within five minutes for the major lines, except during the early morning.

Mr Lui, who is known to visit different stations unannounced, said he noticed that more people could board the second train that arrives instead of having to wait longer.

Buses, he said with pride, have helped the most in easing the congestion problem.

While new trains take about three to four years to get on the tracks and new lines take about 10 to 12 years to build, the $1.1 billion Bus Service Enhancement Programme has seen buses added to the roads within a year, easing congestion and reducing headways.

About 750 new buses will be on the roads by the year end, with another 250 by 2017. Said Mr Lui: "We would have turned the corner on congestion and capacity issues."

In an interview with The Straits Times, Transport Minister Lui Tuck Yew fielded questions on the transport system and the advice he would give his successor. Below are edited excerpts.

Q Is it more difficult now to manage the relationship between the regulator and transport operators?

So there is a certain healthy tension and that's what we need to have, which is why I require them to come and meet me every quarter...

It can be improved, but fundamentally is a sound model. To me, all this talk about privatisation, nationalisation and whatever, frankly, I'm quite agnostic to whatever you term it.

If I look at nationalised models around the world - London, New York and others - they break down a lot more often, it's much more expensive, why do I want to go that way?

If I look at the Hong Kong model which is a very privatised one, high standards, fares are comparable and if you take a hybrid journey - bus and train - they are more expensive than us but if you compare buses and trains on their own, we're comparable.

I would say look, without being dogmatic about labels, what's the outcome? If I shift from what I have today to something else, is there evidence that the grass will be greener when I get to it? Or will somebody say 10 years later that the transport minister was crazy to move in that direction in the first place?

Q What advice will you give your successor?

A All advice ought to be given very gently and softly and best done in private. That's what I will stick to. Advice, I think, works best when it drops like snowflakes - gently settling on the ground.

I've been fortunate. Raymond (his predecessor Raymond Lim) has sown and I reap much of what is sown. In turn, I will sow and somebody else will reap.

There is no way I could deliver Downtown Line 1 and 2 during the four years that I have if he hadn't started it. He talked about the rail financing framework, which we are now still discussing with the operators, but certainly for the new lines, I embarked on it.

He talked about putting buses out on competitive tendering packages - not ready during his time, not during the early years of my tenure - but we are now doing it. So I reap what he has sown.

He has taken flak for MRT congestion and everything else as well... But Raymond did a great job in transport as far as I am concerned. We benefited from it.

I hope that some of the measures that we have put in... will deliver an even better network for us, an even better-performing system in the years to come.

Q Workers' Party chief Low Thia Khiang said you've done a good job, but he also said the timing of the news about you raises questions. What is your response?

A Any ministry is a challenging one. I don't believe there are non-challenging ministries... But I thank Mr Low Thia Khiang for his comments. I think there were some other questions but I couldn't quite read everything.

One question was: Did I have the support of Cabinet members? Yes. Fully. PM (Prime Minister Lee Hsien Loong) was very supportive. I tried to make that very, very clear in my letter to thank him. Ultimately, it is a personal decision.

Let's not dwell on this part too much. After all, it is never about one person or the decisions of one person.