Something in the Circle Line tunnels is interfering with signalling communication between trains and track, and operator SMRT and the Land Transport Authority (LTA) have yet to determine exactly what it is.

Pressed for more information, SMRT and the LTA issued a joint statement yesterday saying that there was "possible signal interference in (the) tunnels". But neither could say what sort of interference it was or what was causing it.

The Straits Times understands that the glitch - which one senior SMRT engineer described as a "phenomenon" - could be related to a software issue or caused by interference from telecommunication equipment.

The system underwent a software upgrade recently. Suspecting that might be the cause, the operator uninstalled new software but the fault persisted.

What is befuddling SMRT engineers further is that the loss of signalling communication is intermittent. When a train loses communication, it applies emergency braking as a safety precaution. This has caused journeys to be not only longer, but also jerkier.

System software experts from French contractor Alstom, which supplied the signalling system, are due to arrive soon to look into the glitch. 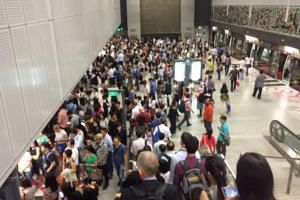 What is befuddling SMRT engineers further is that the loss of signalling communication is intermittent.

When a train loses communication, it applies emergency braking as a safety precaution. This has caused journeys to be not only longer, but also jerkier.

SMRT has warned standing commuters to hold on to handrails.

Going by the slew of public tweets, some trains may also be bypassing stations. Ardawan Izadi said he caught a train on Tuesday which had to reverse when it missed a stop. Mohan Mahapatra posted: "Today's train forgot to stop at Holland Village station."

According to sources, SMRT is now manning the driverless system. In some situations, the trains are driven manually at speeds as low as 18kmh to the next nearest station so that the signalling system can be "reset".

National University of Singapore (NUS) undergraduate Felicia Chua tweeted on Tuesday: "Wow, I took more than an hour to get from Serangoon to campus because of the Circle Line signalling fault."

Another NUS student, Denise Tan, 20, said the train from Bartley to Kent Ridge yesterday stopped several times during her morning journey, "which took much longer".

"It's understandable that a system cannot always be perfect... but shouldn't the service provider offer some sort of fare reduction in such a situation?" she said. "Perhaps that will motivate it to get to the root of the problem."