Like a single cockroach in a bowl of cherries, one major MRT breakdown can spoil commuters' perceptions of the entire rail network. Improvement works in recent years, however, are beginning to rid the network of those 'cockroaches'

Last Tuesday, I gave a talk at the Behavioural Sciences Institute's conference on public transport and public trust.

Friends and associates who had learnt of the topic earlier commented - perhaps half-jokingly - that it was oxymoronic. It is understandable, given recent events on our MRT system.

In July 2015, the North-South and East-West lines - our two main lines - broke down during the evening peak. Nearly half a million commuters were affected.

In March 2016, two SMRT technicians were killed by a train while on the way to fix a fault near Pasir Ris station.

In April 2016, a power fault disrupted service on four lines - the North-South, East-West and Circle lines, as well as the Bukit Panjang LRT system.

Last October, train tunnels in Bishan were flooded following heavy rain. And elsewhere on the North-South Line, a fire broke out. The flood was traced to wilful lapses in maintenance while the fire was caused by leftover construction debris.

Just a month after that, there was a train collision at Joo Koon station, injuring more than 30 people.

It did not help that the North-South Line was glitchy throughout last year because of the resignalling project.

I agree with fellow conference speaker Peter Ho, former head of the civil service, when he said Singapore's MRT system is among the world's better systems, faults notwithstanding. Compared to century-old networks such as those in London, New York and Paris, it is certainly better in many ways.

But the series of major incidents affects confidence. They linger in the collective consciousness, because they seem repetitive.

So, despite the massive engineering efforts to revive the system following the 2011 breakdowns - which in fact resulted in the average distance clocked between disruptions improving - commuters do not trust the system as much as they did previously. This was confirmed by various recent polls, including one done by the Public Transport Council.

By way of explanation, Behavioural Sciences Institute director David Chan spoke about the "power of the negative", referencing psychologist Paul Rozin, who said a single cockroach will instantly ruin a bowl of cherries, but one cherry in a bowl of cockroaches does nothing to alter its appeal.

The recent incidents were "cockroaches" in our system.

But I believe SMRT, its parent Temasek Holdings, and the Government are doing quite a lot to fumigate the system. Following the tunnel flooding and train collision, the hard decision to close stretches of the network from Fridays to Sundays will give engineering teams a lot more time for maintenance and upgrading works.

SMRT chairman Seah Moon Ming has taken on the unprecedented role of "active chair" to, among other tasks, address flaws within the operator - including the morale deficit within certain groups which has been alluded to frequently.

In my talk, I said things are finally turning the corner, but a full recovery is still some way off.

With the new signalling system in place on the North-South Line, January went by uneventfully - a good thing in the rail business.

When the new system is in place on the East-West Line by the middle of this year, we can likewise look forward to a vast improvement in reliability. And it will be something commuters can feel on the ground. After all, the two lines account for two-thirds of total MRT rides, and have in recent years been responsible for nearly two-thirds of major delays.

The new signalling system will also allow the two lines to cope with peak-period demand much better. Today, faults during the peak account for nearly 90 per cent of major delays. The morning and evening peaks make up only one-third of operational hours, but carry half of weekday commuters.

In essence, the new signalling system will rid the network of most of its "cockroaches".

During a panel discussion following my talk, I was asked when confidence in the system will be fully restored. I said it would take a few months of relatively smooth operation (because it is not realistic to have a zero-fault system). It would also take better communication on the part of SMRT to help commuters cope when delays arise. 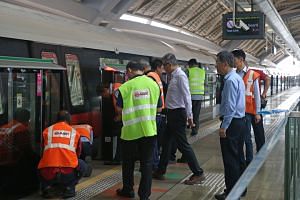 Focus on people, not just numbers, in rail reliability

I added that having a reliable system goes beyond what the operator can do. It also depends much on how a system is designed and built.

This is something I have written about before. A design-build-operate model, such as the one practised by Hong Kong and Taipei, makes for a system that is more robust in the long run. This is because the interests of the three parties are aligned from the start.

The designer knows that a poor or fussy design will be hard to build, and the builder knows that a badly built system will be that much harder to operate and maintain.

Currently, the Land Transport Authority designs the system, contractors bid competitively to build the system, and an operator like SMRT runs it.

If we ever adopt a three-in-one model such as Hong Kong's and Taipei's, we will be in a better position to develop a deep and lasting expertise in the rail sector - a sector which is multi-disciplinary in nature.

While SMRT may deem it necessary now to outsource its non-rail maintenance works, I hope it will not go overboard. After all, SMRT's technical advisory panel has called for the operator to grow and nurture its own engineering expertise instead of relying on third-party vendors.

Professor Kristin Wood, a panel member and co-director of the SUTD-MIT International Design Centre at the Singapore University of Technology and Design, has said: "It is essential for the future of SMRT not to rely on vendor capabilities."

As an analogy, look at ComfortDelGro, Singapore's largest taxi operator. It has grown a strong engineering division which maintains its fleet of 13,000 cabs. ComfortDelGro could well have outsourced this function to the vehicle suppliers, but it felt that doing it in-house was more cost-effective, more efficient, and allowed it a better grasp on fleet management.

Another point I brought up in my talk was the New York City subway. The subway faced its deepest crisis in the 1970s, when commuters had to put up with dirty and vandalised trains, dismal reliability and crime-ridden platforms. Through sheer political will, New York turned its subway around by the late-1990s. By the mid-noughties, reliability had improved by over 30 times. With it, ridership soared and the system went from the red into the black.

But New York let the ball drop again, and is now faced with another subway crisis.

The lesson there is clear. A rail system does not suffer neglect well. Any problem has to be addressed in a timely manner. It will not go away. It will fester and, before long, you will have a whole nest of cockroaches.

Just as I believe SMRT will make its problematic lines shine again one day (hopefully soon), I sincerely hope the lessons of the past will never be forgotten. It is the only way to have people delight in their bowl of cherries once more.

A version of this article appeared in the print edition of The Sunday Times on February 11, 2018, with the headline 'MRT turning the corner, but full recovery some way off'. Subscribe
Topics:
More
Whatsapp Linkedin FB Messenger Telegram Reddit WeChat Pinterest Print Purchase Article Copy permalink