The Land Transport Authority (LTA) can outsource its enforcement actions against errant bicycles and personal mobility devices (PMDs), under a Bill introduced in Parliament yesterday.

But the powers given to the outsourced enforcement officers will be confined to a "specified, limited set of offences", like the indiscriminate parking of bicycles, the LTA said in a statement elaborating on the Bill that is aimed at improving safety on roads and paths.

These officers will also have the powers to examine devices used on public paths to ensure they comply with the Active Mobility Act. And they will be in uniform and display an identification card when on duty, the LTA statement said.

The prospective law is an omnibus legislation that will apply to seven Acts, including the Active Mobility Act. Called the Land Transport (Enforcement Measures) Bill, it was introduced by Senior Minister of State for Transport Lam Pin Min.

The LTA said the Bill will also impose heavier fines for damage caused to road infrastructure.

"Incidents such as oil spills on roads and damage to overhead road structures by over-height vehicles endanger the safety of road users, disrupt traffic and often incur high repair costs," it said.

The proposal is to raise the maximum fine for intentionally causing significant damage from the current $10,000 to $100,000. 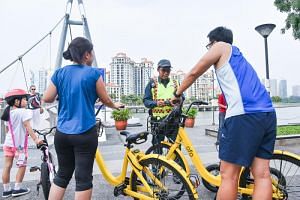 9 in 10 PMDs and e-bikes confiscated due to their size, weight or top speed: LTA

The current legislation also provides for a jail term of up to six months for offenders.

A new offence - causing significant damage by a rash or negligent act - has also been proposed, with offenders facing a fine of up to $50,000 and a maximum jail term of six months.

The Bill will, among others, amend the Active Mobility Act, which took effect in May this year.

The proposed change will make it mandatory for all e-scooters to be registered and to display the registration mark.

More details on the proposed registration regime, which will be implemented early next year, will be announced later this year.

They will also define more clearly personal mobility aids to prevent them from being used to circumvent stricter regulations on PMDs. Such aids include mobility scooters and motorised wheelchairs, which are meant for use by those who struggle to walk.

The Active Mobility Advisory Panelis reviewing the need to further differentiate the use of personal mobility aids from PMDs.